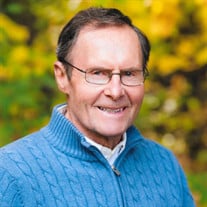 Seabrook Beach – John Maguire, 86, of Seabrook Beach, and formerly of Lewiston, ME, passed away peacefully at his home on Monday, June 8, 2020. John was born May 17, 1934 in Van Buren, ME, a son of the late Edward and Simone (Ayotte) Maguire and the husband of 60 years of marriage with his beloved wife, Lorraine. John was raised in Fort Fairfield, ME. After graduation from Fort Fairfield High School in 1952, John attended the University of Maine at Portland. He left school, enlisted in the United States Army and served his country honorably for two years during the Korean War. He married Lorraine Cote in 1960 and the couple settled in Lewiston to raise their family. John earned his Bachelor’s Degree in Accounting from Husson College and went to work for the Internal Revenue Service in 1961. He was a Special Agent and Criminal Investigator for the IRS and retired in 1989. After vacationing at Hampton Beach for years, John and Lorraine purchased property at Seabrook Beach in 1982 and moved there permanently in 1990. He was a communicant of St. Patrick’s Church in Lewiston and Our Lady of the Miraculous Medal Church in Hampton. John served as a lector, Eucharistic minister and was an active member of the Stephen Ministry at both his churches. He enjoyed bowling and golf and was a past member at Pease Golf Course. He and Lorraine had been wintering in Naples, FL since 1990. In addition to Lorraine, his wife of over 60 years, he is survived by his son, James P. Maguire of Portsmouth, his daughter Kathy Cooney and her husband Greg of Hampton, his brother, Paul Maguire and wife Lorraine of Caribou, ME and his sisters, Ellen Michaud of CT and Margaret Johnson and husband Norman of Presque Isle, ME. He also leaves his loving grandchildren, Lauren and Matthew Cooney and many nieces and nephews. He was predeceased by his son Michael E. Maguire. A Prayer Service will be held on Saturday, June 13, 2020 at 3:00 pm in the Remick & Gendron Funeral Home – Crematory, 811 Lafayette Rd, Hampton. Family and friends may visit at the funeral home from 2:00 pm until the hour of the service. Visitors should be aware that a limited number of people will be allowed in the funeral home at one time. Social distancing must be practiced and masks will be mandatory. Private burial will be in the NH State Veterans Cemetery, Boscawen. If desired, the family suggests donations to Rockingham VNA & Hospice 4 Alumni Dr., Exeter, NH 03833

The family of John Maguire created this Life Tributes page to make it easy to share your memories.

Send flowers to the Maguire family.