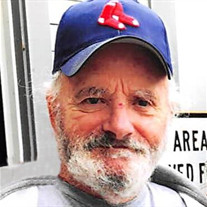 Rye Beach - John “Joe” Mannix, 76, of Rye Beach, passed away peacefully on Saturday, February 15, 2020. Joe was born in Nashua, NH on October 9, 1943, a son of the late Niola and Gordon Pridham. Joe grew up in Rye, NH. He was a foster child who helped his mother raise many foster children; Joe took great pride in this. His love for family carried over into his later years and took on a whole new meaning when he met the Leary’s. As a young adult, Joe formed a close relationship with the Leary family where they took him in and employed him at The Dunes Motor Inn in Rye Beach. There he spent 40 years working and calling it home. Everyone who went to The Dunes knew Joe as “The Mayor of Rye”. Joe was an avid hat collector, and was proud to say he owned over two thousand hats. Joe also took great pride in his passion for the Red Sox, Elvis Presley, and going out to eat with his “girls” Whitney and Leigha. His love for his friends and family was contagious and everyone that met Joe knew they had a lifelong friend. His happiest times included working at The Dunes especially during the summer months where he parked cars and enjoyed making new friends with tourists. Another highlight of his life was working at The Sandpiper Coffee Shop in the 80’s and 90’s where locals gathered for conversation and laughter. In his later years he enjoyed spending time at Summer Sessions, another favorite spot of his. Joe will forever be remembered by his heart of gold, kind eyes, selflessness and his sense of humor. To have known Joe was to love Joe. He leaves behind his family which includes, Martha Leary, Kathy Leary-Rowe, Whitney Leary, Leigha Leary, Peter Leary, Eric Vavra and Amy Greeley. In addition to his parents, Joe was predeceased by Paul F. Leary, Pat P. Leary and Marilyn Jameson; his best childhood friend. Visitation will be held from 5:30 – 7:30 PM on Saturday, February 22, 2020 in the Remick & Gendron Funeral Home-Crematory, 811 Lafayette Road, Hampton, NH 03842. Services will immediately follow at 7:30 PM in the funeral home. Relatives and friends are respectfully invited. Burial will be private. In lieu of flowers, donations may be made to the Epilepsy Foundation , 8301 Professional Place W #230, Landover, MD 20785.

The family of John J. "Joe" Mannix created this Life Tributes page to make it easy to share your memories.

Send flowers to the Mannix family.