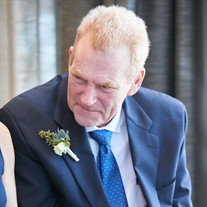 Hampton - John Wesley Noone, 61, of Hampton, passed away peacefully on Saturday, December 14, 2019 at the Portsmouth Regional Hospital. John was born in Lynn, MA on September 9, 1958, a son of the late James and Jacqueline (Caldwell) Noone. After graduating high school in 1976, John became an early entrepreneur, starting a hay transportation business which he later built into a successful trucking company, John W. Noone & Sons. After selling his business, John held various sales and management roles in the transportation industry. John was an avid skier and golfer. John always looked forward to weekend ski trips to Maine with his family, golfing with his friends and co-workers, or late night cribbage matches, swindling his friends or family out of their money. After hanging up the skis and clubs, John's new passion became spending time with his 5 grandchildren. John had a heart of gold and would take the shirt off his back for anyone. John's smile lit up the room, even in the face of adversity. John will be greatly missed by all that were fortunate enough to meet him. John married his beloved wife Cynthia (Brennan) Noone in 1995 and they shared over 25 years together. In addition to Cynthia, John is survived by his sons, Justin Noone and his wife, Samantha, of Bedford, Adam Noone and his wife, Catherine, of Goffstown and Sean Noone of Hampton. He also leaves his grandchildren, Riley, Cooper, Declan, Jordan and Tristan, his brother Jay Noone and his wife, Shirley, of Newburyport, MA and his sister, Julie Noone of Berwick, ME. A Celebration of Life will be held from 11:30am to 3:30pm on Friday, December 20 at the Galley Hatch Restaurant, 325 Lafayette Road, Hampton NH. If desired, memorial donations may be made to Cynthia Noone in her time of need.

Hampton - John Wesley Noone, 61, of Hampton, passed away peacefully on Saturday, December 14, 2019 at the Portsmouth Regional Hospital. John was born in Lynn, MA on September 9, 1958, a son of the late James and Jacqueline (Caldwell) Noone. After... View Obituary & Service Information

The family of John W. Noone created this Life Tributes page to make it easy to share your memories.

Hampton - John Wesley Noone, 61, of Hampton, passed away peacefully...

Send flowers to the Noone family.