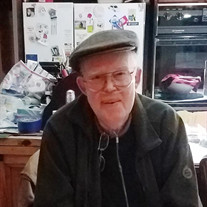 North Hampton, NH – John P. “Pat” Delanty Jr., 80 of North Hampton, passed away peacefully at his home on Thursday, February 23, 2017 surrounded by his devoted wife and loving family. He was born in Chicago, IL on July 22, 1936, a son of the late John P and Margaret (Bye) Delanty Sr. Pat moved from Chicago to Traverse City, MI when he was 8 years old and graduated from St. Francis High School with the Class of 1954. He went on to earn his undergraduate degree from Western Michigan University in Kalamazoo, and upon graduation, went to work for KVP Paper then for many years at Brown Paper Company. He spent his career in paper sales. He met his dear wife, Siobhan Gogarty-Delanty while in Kalamazoo and they were married in 1981. Pat and Siobhan headed to Hilton Head, NC after their marriage and drove north up the east coast until discovering the rocky coast of New Hampshire which reminded Siobhan of her home in Ireland. They fell in love with the area and immediately settled in Rye and eventually to their home in North Hampton. Pat was a kind and considerate man, generous of heart and generous of spirit. Helping others was a big part of who he was and he would never hesitate to lend a hand when someone was down on their luck. He prided himself as being a good listener. Pat was a proud member of AA and attended local support groups up to the end of his life, just to be of assistance to folks with the same struggles he had faced in the past. An avid golfer, Pat was a member of the Portsmouth Country Club and a former member of the Wentworth By The Sea Country Club. In addition to Siobhan, his wife of over 35 years, Pat leaves his sons, Michael of Charlotte, NC, Patrick of Los Angeles, CA and Stephen and his wife Michele of Antwerp, Belgium; his step-children, Siobhan Hyman of Portsmouth and Kevin Hyman of Ft. Lauderdale, FL; his siblings, Larry and his wife Teow of Cosamui, Thailand, James and his wife Donna of Park City, UT, Bill and his wife Jil of Portland, OR and Jane Robinson and her husband Lee of Fountain Hills, AZ. He is also survived by his grandchildren, Jaden, Jackson and Kris and his great grandson Will as well as many nieces, nephews, cousins and dear, close friends. Pat will be sadly missed but always remembered by those who knew and loved him. Visiting hours will be held from 4 to 7 PM on Thursday, March 2, 2017 in the Remick & Gendron Funeral Home-Crematory, 811 Lafayette Road, Hampton. A memorial service will be held at 1 PM Friday, March 3, 2017 at the funeral home followed by a late luncheon at the Portsmouth Country Club. Family, friends and associates are respectfully invited. Burial will be private. If desired, memorial donations may be made to the Crossroads House, 600 Lafayette Road Portsmouth, NH 03801 online at www.crossroadshouse.org/donations or to the New Hampshire S.P.C.A., PO Box 196, Stratham, NH 03885 online at http://www.nhspca.org/donate-2/ .

The family of John P. "Pat" Delanty created this Life Tributes page to make it easy to share your memories.

Send flowers to the Delanty family.