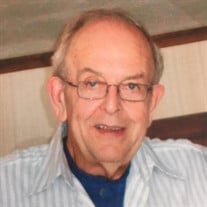 Hampton – John Charles Powers, age 73, of Hampton, died peacefully Monday morning, August 2nd, 2016 at his home surrounded by his family. He was born April 16, 1943 in Boston, Mass., a son of the late Thomas and Eleanor (Johnson) Powers. John enjoyed spending time with his friends and family, traveling and tinkering around the house and back yard. We never knew what kind of trouble he was going to get into or what project we would get dragged into. He was always offering to help others. In later years he enjoyed walks on the beach with his gran-pup Brutus, dinners out or just spending time with Marilyn and the family. He grew up in Peabody, Mass., graduating from Peabody High school in 1961. After high school he served in the Air Force and then went onto school at East Coast Aero Tech. Later, he drove tractor trailers for GTE Sylvania for 19 years. In 1976 he moved to Exeter, where he raised his family and helped with the family's Sherburne store in Portsmouth. In the 80's he was an active member of St. Michael's Church, often driving the big blue bus and helping where ever he could. In 1991 he moved to Torrance CA, where he worked for the Union Pacific Railroad as a safety coordinator until he retired in 2006. In 2007 he returned to the seacoast, to spend time with his family. He was also a member of Teamsters Local 42 in Reading Mass. He was the husband and best friend of the late Alexandra Sandy (Stefanski) Powers who predeceased him in 2007. They were married for 35 adventurous years. He leaves two daughters, Cheryl Powers, her significant other, John Warren, Shannon (Powers) Panzo, her husband Mel, all of Hampton, four grandchildren Cameron, Andrew, Dawn and Rommell, Jr., two great grandchildren, Jaxon and Cashius, his brother, Thomas Powers of Cocoa Beach, FL, his nieces, Lori Braese of Danvers, Mass., and Chris Powers of Brandon, VT and his companion, Marilyn Sweeney Waldrip of Newburyport, Mass., and her family. He was predeceased by his son, Gordon Powers in 2000. Those who were fortunate to know him, were better for it. He can be remembered with just a smile. Visiting hours will be from 3-5 P.M. Sunday, August 7, 2016 in the Remick & Gendron Funeral Home-Crematory, 811 Lafayette Road, Hampton. A mass of Christian burial will be celebrated at 10 A.M. Monday August 8, 2016 at Our Lady of the Miraculous Medal Church, 289 Lafayette Road, Hampton. Relatives and friends are respectfully invited. In lieu of flowers, donations may be made to the New Hampshire S.P.C.A., P.O. Box 196, Stratham, NH 03885.

The family of John C. Powers created this Life Tributes page to make it easy to share your memories.