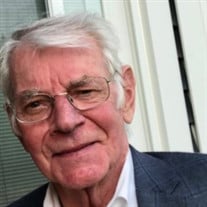 Hampton – Dr. John S. Riedel, Jr., 76, of Hampton, died Monday, July 22, 2019 at his daughter’s home in Stratham with family by his side. He was born in Brooklyn, NY November 27, 1942 a son of the late J. Stuart and Mary Louise (McGailey) Riedel. Dr. Riedel graduated from Stepinac High School, White Plains, NY, and received his under graduate degree from Manhattan College, Bronx, NY. He received his doctorate from the University of Bologna, Bologna, Italy. He was a veteran serving with the US Army. He served his internship at Misericordia Hospital in the Bronx before beginning his internal medicine practice in Exeter. He was a renowned EKG reading specialist and well known in the Exeter Hospital community. He retired in 2017 with 33 years of medical service to the seacoast area. John was passionate about food and loved every aspect of creating a meal. Summertime gave him joy in the way of golf, and in the winter he always appreciated hearing about the ski conditions of any mountain. He was a communicant of St. Michael Church in Exeter, and various local parishes. He leaves two daughters, Jacqueline R. Burke and her husband Sean of Stratham with their three sons, Oliver, Gus and Julian and his daughter Christina Riedel of Portsmouth, his two brothers, Robert Riedel of Peekskill, NY and Richard Riedel of Greensboro, NC. He was predeceased by his son John S. Riedel in 2007 and by his daughter Jennifer Riedel in 1984. Visiting hours will be from 3-5 P.M. Sunday, July 28, 2019 at the Remick & Gendron Funeral Home-Crematory, 811 Lafayette Road, Hampton. A mass of Christian burial will be celebrated at 10 A.M. Monday, July 29, 2019 at St. Michael Church, corner of Front and Lincoln Streets, Exeter. Burial will follow in the Exeter Cemetery. Relatives and friends are respectfully invited. In lieu of traditional remembrances donations may be made to Food For The Poor Inc P.O. Box 979005, Coconut Creek, FL 33097-9005.

The family of Dr. John S. Riedel Jr. created this Life Tributes page to make it easy to share your memories.

Send flowers to the Riedel family.