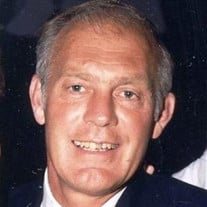 Rye, NH – John Ryer Schermerhorn Jr., 81 of Rye, died peacefully on Thursday, March 31, 2016, following a period of failing health. He was born in Orange, NJ on May 1, 1934, the son of the late John R. and Ethel (Lange) Schermerhorn. Raised in Florham Park, NJ he graduated from Madison High, where he lettered in golf, football and basketball, winning a state championship in football and three state golf championships. John graduated from Colgate University where he studied Economics and played on the golf and basketball teams. He was also an active member of the Phi Delta Theta fraternity. John participated in the Air Force ROTC program and upon graduation in 1956 went on proudly to serve three years in the Air Force, obtaining the rank of 1st Lieutenant. Upon his discharge in 1959 John started his career as an investment banker at American Securities LLC. He continued working on Wall Street for 37 years, retiring from Wertheim Schroder & Company Inc. in 1996. He enjoyed his membership with the New Jersey Bond Club. His passion for golf led John to memberships at Spring Brook Country Club, Morristown, NJ where he was a two time club champion, Baltustrol Golf Club, Springfield, NJ where he won two more club championships and finally to Abenaqui Golf Club in Rye, NH where he won the Senior Club Championship. John enjoyed many years of helping to raise money for Morristown Memorial Hospital, and serving on the boards of the Portsmouth Athenaeum and Abenaqui Golf Club. John took great pleasure in spending time with his family and friends, and could be found on the sidelines cheering on his grandchildren. He loved hiking the White Mountains, playing competitive bridge and rooting for the Patriots and Red Sox. Family members include wife of 60 years Dellen (Smith) Schermerhorn of Rye, children, Julie Siciliano of Madison, NJ, John R. Schermerhorn III of Rye, Jeffrey W. Schermerhorn of Madison, NJ and Jill A. Schermerhorn of Stanhope, NJ; sister Lange Schermerhorn of Washington, DC and 8 grandchildren. Visitation will be held from 4 – 7 PM Wednesday, April 6, 2016 in the Remick & Gendron Funeral Home- Crematory, 811 Lafayette Road, Hampton. Funeral services will be held at 10 AM on Thursday, April 7, 2016 at the funeral home. Burial will follow with military honors in the Central Cemetery in Rye. Relatives and friends are respectfully invited. In lieu of flowers, memorial donations may be made to the Special Olympics at Specialolympics.org.

The family of John Ryer Schermerhorn, Jr. created this Life Tributes page to make it easy to share your memories.

Send flowers to the Schermerhorn family.