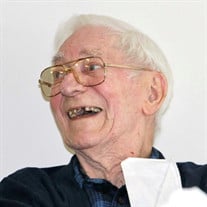 Rye – John "Jack" Simon, Sr., 93, a resident of Hampton, New Hampshire, died Saturday, September 7, 2019 at Exeter Hospital. He was born in Newport, Kentucky May 25, 1926, a son of the late John and Gertrude (Schmitt) Simon. Mr. Simon was a veteran, serving with the US Army in the Philippines during WW II, and with the US Air Force in Korea. His last active duty assignment was in Libya, Africa. He retired as a Chief Master Sergeant in 1964 with 22 years of service. After retiring from the military, he worked at Symphonic Corporation, Clarostat, Compugraphic Corporation, and Dunfy Corporation. In John’s earlier years he played semi-pro baseball for the Louisville Colonels, and upon settling in New Hampshire became an avid Red Sox fan. He also enjoyed writing, particularly poetry. He was a 49 year member of the Hampton's American Legion Post 35. He was the husband of the late Anna (Meschenelli) Simon who predeceased him in 1998. Family members include two sons, John J. Simon, Jr. of Portsmouth, Richard C. Simon and his wife Beth of Hampton, daughter Deborah A. Simon of Hampton, five grandchildren, four great grandchildren, three sisters, Delores Caldwell, Anna Mae Simon, and Mary Simon, all of Newport, Kentucky, and his longtime companion Sparkles the cat. He was predeceased by 11 brothers. A visiting hour will be held from 10-11 AM Saturday, September 14, 2019 at the Remick & Gendron Funeral Home-Crematory, 811 Lafayette Road, Hampton. Services will immediately follow at 11 A.M in the funeral home. Burial will follow in the High Street Cemetery, Hampton. Relatives and friends are respectfully invited. In lieu of traditional remembrances, donations may be made to the New Hampshire S.P.C.A., PO Box 196, Stratham, NH 03885.

The family of John "Jack" Simon, Sr. created this Life Tributes page to make it easy to share your memories.