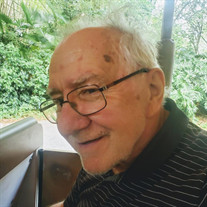 Newton – John J. “Jack” Tumulty, 80, of Newton, died Tuesday, August 4, 2020 at his home with family by his side. He was born in Waltham, MA January 22, 1940 a son of the late John Tumulty and Jane (Collins) Tumulty Mooney. Jack was raised in Arlington, MA, attended Swampscott High School, Swampscott, MA and received his Associates degree from North Shore College in Danvers, MA. He was a veteran serving with the US Marine Corps. In his earlier years he worked in sales and later as an occupational therapist for Angel Care, Haverhill Public Schools, and rehabilitation facilities retiring in 2003. He made his home in Newton since 2001 coming from Merrimac, MA and prior to that Lynn, MA. John enjoyed being active with the Newburyport Arts Festival as well as in Portsmouth offering his talent as a playwright. Some of his award-winning plays were “Churchill”, “White Goods”, and “Death at the Dorsey”. John also worked as a character actor. He shared 45 years of marriage with his wife Carol A. (Lessard) Tumulty. In addition to his wife he leaves his daughter, Christine Tumulty of Newton, two grandchildren Kayla and Jacob Tumulty, his brother Michael Tumulty of Marblehead, MA, his sister Maureen ter Poorten of Lubec, ME, nieces and nephews. He was predeceased by his son David Tumulty in 1984. Services will be held 11 A.M. Wednesday, August 12, 2020 at the Remick & Gendron Funeral Home-Crematory, 811 Lafayette Road, Hampton. Social distancing and masks will be required. Relatives and friends are respectfully invited. Interment will be private in the Pine Grove Cemetery, Lynn, MA. In lieu of traditional remembrances, donations may be made to Special Olympics New Hampshire

The family of John J. Tumulty created this Life Tributes page to make it easy to share your memories.

Send flowers to the Tumulty family.