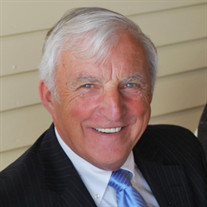 Hampton – John H. White, 75, of Hampton and Myrtle Beach, SC, formerly of Windham, passed away peacefully on Friday, March 15, 2019. He was born in Methuen, MA on September 15, 1943, a son of the late Joseph M. and Esther (Lahey) White. Raised in Lawrence, MA he graduated from Lawrence High School with the Class of 1961 and later attended Rittners School of Floral Design in Boston John enlisted in the United States Marine Corps Reserve in 1964 and served until 1991, reaching the rank of Chief Warrant Officer (CWO-4). During this time he also had a successful career as an ironworker, working over 30 years with Ironworkers Local 7 out of Boston, MA. Family was very important to him and his grandchildren were his pride and joy. He enjoyed helping people in any way he could. In his spare time, he would golf, enjoy the sunshine and always loved a good game of cribbage. He shared 45 years of marriage with his late wife Nancy (Batchelder) White who predeceased him in 2010. Surviving family members include his daughters, Jana Peterson and her husband Jeff of Windham and Leah White Schaake of Hampton; grandchildren, Jeffrey and Kelsey Peterson and Freddy, Jack, Lucas and Joshua Schaake; siblings, Kenneth White, Nancy Meech, Terri Fazio and sister in law Rita Batchelder. In addition to his parents and wife, he was predeceased by his brother Michael White. Visiting hours will be held from 4 – 8 PM on Friday, March 22, 2019 at the Remick & Gendron Funeral Home-Crematory, 811 Lafayette Road, Hampton. A mass of Christian burial will be celebrated at 11 AM on Saturday, March 23, 2019 at St. Theresa Church, 815 Central Road, Rye Beach. Burial will follow in the High Street Cemetery, Hampton. Relatives and friends are respectfully invited. In lieu of flowers, donations may be made to the Wounded Warrior Project , PO Box 758517, Topeka, Kansas 66675-8517.

The family of John H. White created this Life Tributes page to make it easy to share your memories.