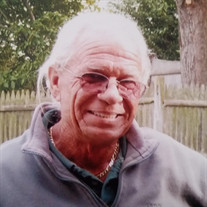 Seabrook – John Francis Wright, 69, of Seabrook and a former long-time resident of Salem, MA, passed away peacefully, surrounded by his loving family, at the High Pointe Hospice House in Haverhill, MA on Monday, December 18, 2017. John was born in Salem, MA on September 6, 1948, a son of the late Joseph and Priscilla (Pydynkowski) Wright. John was raised in Salem and enlisted in the United States Air Force after high school. He was a well-known auto mechanic in the Salem area for many years and also worked for the City of Salem until his retirement in 2013. John moved to Seabrook in 2002 where he lived until the time of his death. He was an avid golfer and a member of the local American Legion Post. John is survived by his daughter, Sarah Liberato and her husband, Joseph of Mason, MI; his son Jeffrey Wright of Peabody, MA; his sister, Valentine Tollo of Seattle, WA; his brothers, Robert and wife Patte of Salem, MA, Gene and wife Susan of South Hamilton, MA and Scott and Agniezka, currently residing in Italy. He also leaves his grandchildren, Michael and Samuel Liberato. In addition to his parents, he was predeceased by his brother Joseph and his sisters, Shirley Denis and Gloria Fulcher. Services will be private. In lieu of flowers, the family suggests memorial donations to the American Cancer Society.

The family of John F. Wright created this Life Tributes page to make it easy to share your memories.

Seabrook – John Francis Wright, 69, of Seabrook and a former...