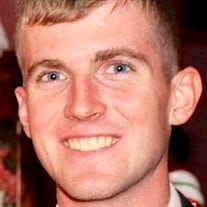 Hampton - Jonathan W. Currier, (CPL USMC) 21, of Hampton, died August 9, 2018. He was born June 18, 1997 in Exeter a son of Christopher and Kathleen (Ray) Currier of Hampton. Family and friends remember Jon as a kind friend and committed serviceman. He was a Winnacunnet High School Marine Corps JROTC cadet, Hampton Boy Scout Troop 380 Eagle Scout and altar server at Our Lady of the Miraculous Medal Parish in Hampton. He graduated from Winnacunnet High School with the Class of 2015. He loved sports growing up, playing Hampton Youth Association soccer, baseball, basketball and flag football. He was a member of the Winnacunnet High School swim team. He had a passion for building Legos, which continued as an adult. Jon was a crew chief on a CH-53E Super Stallion helicopter. He loved working and flying on helicopters. He joined the Marines three years ago to see the world. Jon was a member of Marine Medium Tiltrotor Squadron 166 (Reinforced), 13th Marine Expeditionary Unit, 1 Marine Expeditionary Force, Camp Pendleton, California. At the time of his death he was deployed on the USS Essex, off the coast of the Philippines. In addition to his parents, he leaves his brother, Collin Currier, his paternal grandparents Walter and Jill (Jackson) Currier of Banbury, UK, many aunts, uncles and cousins. He was predeceased by his maternal grandparents, Daniel and Barbara (Hovey) Ray of Haverhill, MA. Visiting hours will be held from 4 - 8 PM Friday, September 14, 2018 at the Remick & Gendron Funeral Home-Crematory, 811 Lafayette Road, Hampton. A memorial mass will be celebrated at 10 AM, Saturday, September 15, 2018 at Our Lady of the Miraculous Medal Church, 289 Lafayette Road, Hampton. Military honors will follow in the High Street Cemetery, Hampton. Relatives and friends are respectfully invited. In lieu of flowers, donations may be made to The Wingman Foundation, 10915 Via Brescia Road #909, San Diego, CA 92129 http://www.wingmanfoundation.org/.

The family of CPL Jonathan W. Currier created this Life Tributes page to make it easy to share your memories.