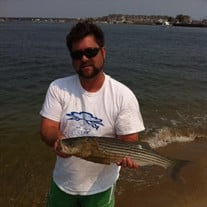 North Hampton – Jonathan J. Ristau, 39, of North Hampton, passed away unexpectedly on August 1, 2017 after an automobile accident in Danvers, MA. He was born in Brockton, MA on December 15, 1977 a son of Jack and Margaret Ristau, of Hampton. Raised in Hampton, he graduated from Winnacunnet High School with the Class of 1996 and later the University of New Hampshire in 2000 with a BA in Economics. Following graduation from UNH, Jonathan worked in the financial industry. First at State Street Bank, then Fidelity and most recently for JP Morgan Chase as Assistant Vice President of Institution Fund Accounting Services. Jonathan was an avid Red Sox and Patriots fan who enjoyed salt water fishing, especially for striper, gardening, Pearl Jam, and grilling, where he was known by family and friends as the BBQ Pit Master. In addition to his parents, surviving family members include his wife of 12 years, Michele (Paul) Ristau of North Hampton; brothers, Jeff Ristau of Portsmouth and Greg Ristau of Hampton; brother in law Michael Paul of Portsmouth; mother in law Deborah Paul of North Hampton and many extended family, dear friends and his beloved dog Cody. He was predeceased by his father in law George Paul. Jonathan was a kind, loving and gentle soul, who will truly be missed by all who knew him. He was always a gentleman and friend to everyone who had the good fortune of knowing him. He was welcoming and kind to all people and creatures of god. This world has lost a uniquely wonderful man, however his spirit will live on through the many people he has touched. Visitation will be held from 2 to 4 PM and 6 to 8 PM on Tuesday, August 8, 2017 in the Remick & Gendron Funeral Home - Crematory, 811 Lafayette Road, Hampton. A celebration of his life will be held at 11 AM on Wednesday, August 9, 2017 in the funeral home. Relatives and friends are respectfully invited. Burial will be private. In lieu of flowers, donations may be made to the American Diabetes Association, P.O. Box 15829, Arlington, VA 22215.

North Hampton &#8211; Jonathan J. Ristau, 39, of North Hampton, passed away unexpectedly on August 1, 2017 after an automobile accident in Danvers, MA. He was born in Brockton, MA on December 15, 1977 a son of Jack and Margaret Ristau, of... View Obituary & Service Information

The family of Jonathan J. Ristau created this Life Tributes page to make it easy to share your memories.

Send flowers to the Ristau family.