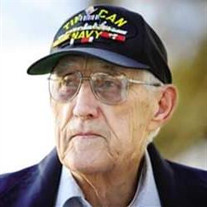 North Hampton - Joseph L. Butler, 94, of North Hampton, passed away peacefully on Saturday, January 12, 2019 at the New Hampshire Veterans Home in Tilton. He was born on September 26, 1924 in Wakefield, MA, the son of the late Oscar G. and Ellen (Gerrior) Butler Joe was raised on Butler Avenue in Wakefield and a 1943 graduate of Wakefield High. After school, Joe enlisted in the United States Navy and served his country honorably as a radioman onboard the destroyer, USS Izard (DD-589), during WWII. While on station north of Guam, Joe detected an emergency beacon from a downed patrol plane that led to the rescue of 5 airmen. Upon return from the war, Joe met his late wife, Marie “Simone” (Dionne) Butler while she was working at Paul & Mickey’s Restaurant in Biddeford, ME and they were married in Madewasca, ME in 1949. Joe had worked as a station agent for B&M Railroad, as a clerk for the liquor commission, and as an underwriter for Metropolitan Life. He and Simone then owned and operated Simone’s House of Pancakes in Hampton, serving the greater Seacoast community until their retirement in 1987. Joe and Simone settled in North Hampton to raise their family and lived there for over 40 years. They bought a vacation home in Packington, Quebec after the sale of the restaurant, and enjoyed their Canadian home as often as possible. Joe is survived by his children, Rodney Butler and wife Sheri of Kittery, ME, Michael Butler and wife Diana of Navato, CA, Linda Acker and husband Alan of LaCrescent, MN and Sheryl Smith and husband Peter of North Hampton, twelve grandchildren; Adam and Heather Butler Dube, Christian Frank, Samantha Campbell, Jason and Nathan Butler, Sean, Elizabeth, Michael, Richard, Kate and Christian Jackson and 11 great grandchildren. He will be greatly missed by his family and his many friends who all knew him as JB. He was predeceased by his beloved wife of over 60 years, Simone Butler who died in 2010 and his brothers, Oscar W. Butler, Frank A. Butler and Harold A. Butler. Visiting hours will be from 11 am to 1 pm on Saturday, January 19, 2019 in the Remick & Gendron Funeral Home ~ Crematory, 811 Lafayette Rd, Hampton. A prayer service will follow the visitation starting at 1 pm in the funeral home. Interment will be in Center Cemetery, North Hampton. The family wishes to give a special thanks to the staff at the NH Veterans Home and asks that you make a donation in Joe’s name to the NH Veterans Home, 139 Winter St., Tilton, NH 03276.

North Hampton - Joseph L. Butler, 94, of North Hampton, passed away peacefully on Saturday, January 12, 2019 at the New Hampshire Veterans Home in Tilton. He was born on September 26, 1924 in Wakefield, MA, the son of the late Oscar G. and Ellen... View Obituary & Service Information

The family of Joseph L. Butler created this Life Tributes page to make it easy to share your memories.

Send flowers to the Butler family.