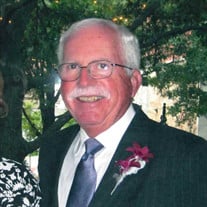 Cape Coral, FL – Joseph Edward Cove, Jr., 80, of Cape Coral, FL and Hampton Beach, NH, passed away peacefully on Monday, September 20, 2021 at the Portsmouth Hospital after a brief illness. Joe was born in Worcester, MA on July 11, 1941, the only child of the late Joseph E. and Gladys (Norton) Cove, Sr. He shared over 35 years with his partner and love of his life, Carol O’Brien of Hampton. Joe was raised in Worcester graduating from St. John’s High School formerly located in Worcester, MA and immediately went to work for the Raytheon Corporation. Going to school nights, he earned his Bachelor’s Degree in Accounting from Bentley College. After 45 years with Raytheon, Joe retired in 2007. He and Carol shared their time between Hampton and Cape Coral. They enjoyed traveling and just spending leisure time on his boat and watching the boats go by on the canal in Cape Coral and to the waves on the beach in Hampton. Joe enjoyed real estate investing and loved watching his investments in the stock market. He liked being active and particularly enjoyed his daily 5 mile walks. In addition to his beloved Carol, Joe is survived by his sons: Stephen E. Cove and his wife DeeDee of Raleigh, NC, their sons Ethan and Kyle Cove; David V. Cove and his wife, Caroline of Holly Springs, NC, their daughter Gracie Cove; his daughter, Kristen Daziel of Monroe, NC and her children Abigail, Wyatt and Caila (Daziel) Norton. He also leaves his stepsons: Craig J. O’Brien of Hillsborough, OR and B. Scott O’Brien and his wife Lisa of Wrentham, MA, and their children Dylan, Sydney, Hunter and Riley O’Brien Services will be private. Arrangements are by the Remick & Gendron Funeral Home – Crematory, Hampton, NH. In lieu of flowers, memorial donations may be made to St. Jude, the American Cancer Society or the American Heart Foundation.

The family of Joseph Edward Cove Jr. created this Life Tributes page to make it easy to share your memories.

Send flowers to the Cove family.