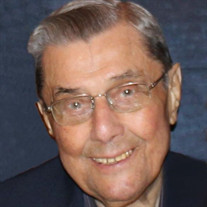 Hampton – Joseph R. “Joe” Deschamps, 90, of Hampton, died peacefully Friday, February 5, 2016 at Exeter Hospital. He was born November 6, 1925 in Methuen, MA a son of the late August and Amanda (Levesque) Deschamps. Raised in Lawrence, MA he attended Lawrence High School before leaving at the age of 18 and enlisting in the Army Air Corps, where he proudly served during World War II. After serving 4 years in the Air Corps he returned home, and went on to attend and graduate with a degree in engineering from the former Lowell Technological Institute. Mr. Deschamps began his career in the textile industry, moved to Georgia and returned to Lawrence in 1955 to work for the former Lawrence Folding Box Company, where he eventually became central planning manager before retiring in 1992. Shortly before retirement Joe and his late wife of 63 years, Hazel T. Deschamps moved to the Ocean Crest Condominiums in Hampton, where he was a proud resident for more than 30 years. Joe was independent up to the last days of his life. He was an avid Patriot and Red Sox fan who always stayed up to date on current events. He also enjoyed walking, collecting sea glass and fishing along Hampton Beach. Family members include his daughter Diana Ferland and her husband Francis of Yarmouth, ME; brother Jules Deschamps and his wife Christiane of Cape Elizabeth, ME; grandchildren, Marc Ferland and his wife Emily Locher of Weston, CT, Christopher Ferland and his wife Julie of Duxbury, MA; great granddaughter Isabelle Ferland and several nieces and nephews. In addition to parents and wife he was predeceased by his brother Leo Deschamps. The family extends a special thank you to the team of caregivers in the Progressive Care Unit at Exeter Hospital. A visiting hour will be from 10-11 AM Saturday, February 13, 2016 at the Remick & Gendron Funeral Home-Crematory, 811 Lafayette Road, Hampton. A prayer service will immediately follow at 11 AM in the funeral home. Burial will follow in the High Street Cemetery. Relatives and friends are respectfully invited. In lieu, of flowers donations may be made to the Our Lady of the Miraculous Medal Parish, 289 Lafayette Road, Hampton, NH 03842 or Catholic Charities New Hampshire, 215 Myrtle Street, Manchester, NH 03104.

The family of Joseph R. "Joe" Deschamps created this Life Tributes page to make it easy to share your memories.

Send flowers to the Deschamps family.