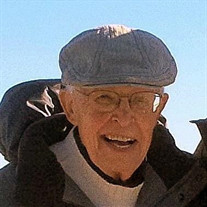 Alexandria, Virginia – Joseph F. McNally, 93, of Alexandria, Virginia and former longtime resident of Hampton, New Hampshire, passed away peacefully on Wednesday, July 4, 2018 at Sunrise Assisted Living. He was born in Lawrence, Massachusetts on March 24, 1925 a son of the late James R. McNally and Yvonne R. (Landry) McNally. Raised in Lawrence he graduated from Central High School with the Class of 1944 and went on to graduate from Boston College in 1948 and remained a lifelong BC Eagles fan. Mr. McNally was the district manager for Cook United which took him and his family to South Hadley, Massachusetts and Catonsville, Maryland. He retired and then relocated back to Hampton, NH where he had spent many happy summers with his family. He shared 52 years of a wonderful marriage with his late wife Rita J. (Powers) McNally who predeceased him in 2005. After retirement they enjoyed golf, friends, sports, news, reading and traveled extensively through the US in their motorhome including visiting children and grandchildren in Florida and Virginia. A super Red Sox fan he watched every inning of every game and lived to see them win three World Series. Surviving family members include his children, Jo-Ann McNally Muir of Alexandria, Virginia and James McNally of Miami, Florida; sister, Jean McNally Hart of Windham, NH and 6 grandchildren and 4 great grandchildren and many nieces and nephews. In addition to his parents and wife he was predeceased by his brothers, Fr. James McNally, OSA and John McNally. Visiting hours will be from 5 to 7 PM on Tuesday, July 17, 2018 in the Remick & Gendron Funeral Home, 811 Lafayette Road, Hampton, NH 03842. A Mass of Christian Burial will be celebrated at 10 AM on Wednesday, July 18, 2018 in Our Lady of the Miraculous Medal Church, 289 Lafayette Road, Hampton. Burial will immediately follow in Immaculate Conception Cemetery, Lawrence, MA. Relatives and friends are respectfully invited.

The family of Joseph F. McNally created this Life Tributes page to make it easy to share your memories.

Send flowers to the McNally family.