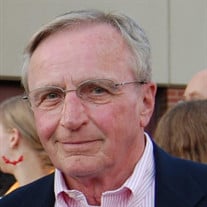 Rye - Joseph G. Mills, Jr., 80 of Rye, died Friday, October 4, 2019 at the Edgewood Center surrounded by his loving family. He was born in Portsmouth August 1, 1939 a son of the late Joseph G. and Theresa (Donovan) Mills. Joe grew up and was raised in Portsmouth and attended St. Patrick’s School and graduated from Portsmouth High School with the Class of 1957. In 1959 he began working for the US Postal Service and in 1960 transferred to Rye as the only rural carrier for the entire town, a job and a town he loved. He retired from the Rye Post Office after 37 years of service. Joe was very active in Rye serving on the Board of Selectman for 25 consecutive years. In the 2017 Town Report it was written about Joe: “As selectman Joe could be described as consistent, direct, tenacious, and outspoken with a memory as long as the Rye coastline. During his 25 years of service he was never known to be diplomatic or subtle, but few, if any, would question his dedication to the Town of Rye.” Joe served on the budget committee and recreation commission. He was a Little League coach and Pee Wee football coach and also was President of the Portsmouth High School Quarterback Club for several years. He made his home in Rye with his wife of 58 years Marcella (Fish) Mills whom he met in 7th grade at St. Patrick’s School. In addition to his wife, he leaves four children, Joseph Mills, III of Greenland, Brian Mills and his wife Toni of Hampton, Kevin Mills of Rye, and Melissa Bunton and her husband Bill of Cumberland, ME, six grandchildren, Alexandra, John, Patrick, and Andrew Mills, William and Sadie Bunton, and many nieces and nephews. In addition to his parents he was predeceased by his brother John Mills, and sisters Josephine Bosen and Mary Allen. Joe’s family wishes to thank the dedicated nurses, caregivers, and staff at the Edgewood Center in Portsmouth for their compassion, care, and love during his stay there. Visiting hours will be from 4-7 P.M. Tuesday, October 8, 2019 at the Remick and Gendron Funeral Home-Crematory, 811 Lafayette Road, Hampton. A mass of Christian burial will be celebrated at 11 A.M. Wednesday, October 9, 2019 at St. Theresa Church 815 Central Road, Rye Beach. Burial will follow in the Central Cemetery in Rye. Relatives and friends are respectfully invited. Donations in his memory may be made to the Edgewood Center Activities Fund, 928 South Street Portsmouth, NH 03801.

Rye - Joseph G. Mills, Jr., 80 of Rye, died Friday, October 4, 2019 at the Edgewood Center surrounded by his loving family. He was born in Portsmouth August 1, 1939 a son of the late Joseph G. and Theresa (Donovan) Mills. Joe grew up and was... View Obituary & Service Information

The family of Joseph G. Mills, Jr. created this Life Tributes page to make it easy to share your memories.