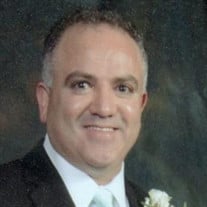 Nashua – Joseph Michael Minai, 50, of Nashua, and a former longtime resident of Hampton Falls, passed away suddenly on Thursday, October 27, 2016 at his home. Joe was born on April 25, 1966 and immigrated to America when he was 16 years old. He had no understanding of the English language but was a quick study and quite fluent after just 6 months in this country. He settled in Newton with his family and graduated from Newton North High School with the Class of 1984. He went on to earn his Bachelor’s Degree in Engineering from Northeastern University and in 1998, went to work for Telsource Corporation as a contractor for Liberty Mutual of Portsmouth. It was his job that brought him and his family to the New Hampshire seacoast and they settled in Hampton Falls. In 2013 Joe took a position with Granite State Electronics of Nashua as Vice President of Sales and Business. Joe was a very spiritual man who loved the Lord with all his heart. He never slowed down and would do anything for those in need. Those that met Joe could never forget him because he was an upbeat individual with a friendly and positive attitude. To say Joe was a food connoisseur would be an understatement. He loved to eat but the best part of eating for Joe was sharing meals with his family and friends. Joe had many other interests including holding his private pilot’s license and being a member of the Portsmouth Freemasons, St. John’s Lodge #1. Above all else, Joe loved his girls as they were the foundation of his soul. Amanda and Isabella will miss their Daddy’s daily messages of love. He is survived by his beloved daughters, Amanda Crawford and her husband, Isaac of Sioux Falls, South Dakota and Isabella Minai of Epping; his beautiful grandchildren, Beau, Rubie and Ralph; his brother Darius Minai and his wife Jennifer of Salem Township, MI and Isabella’s mother, Kimberly Minai of Epping. Visiting hours will be from 5 to 7 pm on Wednesday, November 2, 2016 in the Remick & Gendron Funeral Home – Crematory, 811 Lafayette Rd., Hampton. Services will be held on Thursday at 11 am at the Hampton Falls First Baptist Church; 3 Lincoln Ave., Hampton Falls. Friends and associates are respectfully invited. Burial will be private. In lieu of flowers, memorial donations may be mailed to the Seacoast Family Food Pantry, 210 West Road, Suite 3, Portsmouth, NH 03801 or made online at www.seacoastfamilyfoodpantry.org/donate.php.

Nashua &#8211; Joseph Michael Minai, 50, of Nashua, and a former longtime resident of Hampton Falls, passed away suddenly on Thursday, October 27, 2016 at his home. Joe was born on April 25, 1966 and immigrated to America when he was 16 years... View Obituary & Service Information

The family of Joseph Michael Minai created this Life Tributes page to make it easy to share your memories.

Nashua – Joseph Michael Minai, 50, of Nashua, and a former longtime...

Send flowers to the Minai family.