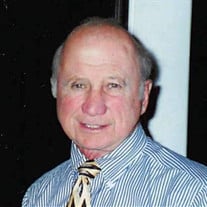 Hampton – Joseph (Joe) Victor Regis Jr., 87, of Hampton, passed away peacefully at Portsmouth Hospital on Thursday, March 14, 2019, following a period of declining health. He leaves behind his wife of 63 years, Laura (Witwicki) Regis, their children, John Regis of New York, NY, Susan Regis of Somerville, MA, James Regis of Marblehead, MA and Lori Regis and her spouse Amaryl Schwertner of San Francisco, CA; sister Angela Krauchuk and her husband Leo, and several nieces and nephews. Joseph was born in Peabody, MA on June 19, 1931 the first of two children to Joseph V. Regis Sr. and Margaret (Cotti) Regis. He attended Peabody High School, where he played baseball and was a star halfback of the Tanners football team. In 1947 he played a major role in one of the biggest upset in Massachusetts high school football history, when Peabody defeated the legendary Harry Agganis and his previously undefeated Lynn Classical. Graduating in 1948, Joe went on to prep school at Worcester Academy, and then attended the University of New Hampshire, where he co-captained the football team in 1953. While attending UNH, he began dating the love of his life, Laura Witwicki, also of Peabody, MA. Joe graduated college in 1954 and proudly served in the United States Army, where he also played hockey while stationed in Alaska. On leave from basic training he married his fiancée Laura, and after his time in the service, they began a family. Joe worked for his father in the family business, Regis Tanning, both in Peabody, and later as the general manager of the Raymond, NH plant. The Regis relocated to Hampton, NH in 1961, where Joe and Laura have happily lived ever since. Joe finished his career working for Sylvania in Danvers, MA, retiring in 1996. Joseph volunteered for the Raymond Fire Department and was also a youth baseball and hockey coach. He was a communicant of Our Lady of the Miraculous Medal church as well as a member of the Holly Name Society. He was a life-long Red Sox fan, an overall sports enthusiast, a jack-of-all-trades, and a carpenter, who liked working around his Moulton Road and North Shore Road homes. In retirement, Joe became passionate about tennis, and played this sport well into his eighties, when illness slowed him down. In 2017, he was honored at halftime at a UNH football game for his accomplishments on the gridiron Joe Regis was a devout Catholic whose actions spoke louder than his words. Indicative of his quiet humility, in 2002, Joe was elected to the Peabody High School Athletic Hall of Fame. He respectfully declined; deflecting the honor to others he thought deserved it more than he. Joe will be missed for his honor, his self-deprecating humor, and his general decency. Visiting hours will be held from 4 – 7 PM on Thursday, March 21, 2019 at the Remick & Gendron Funeral Home-Crematory, 811 Lafayette Road, Hampton, NH. A mass of Christian burial will be celebrated at 11 AM on Friday, March 22, 2019 at Our Lady of the Miraculous Medal Church, Hampton. Burial will follow at the High Street Cemetery, Hampton. Relatives and friends are respectfully invited. In lieu of flowers, donations may be made to the OLMM Church OutReach Program, 289 Lafayette Road, Hampton, NH 03842.

The family of Joseph V. Regis Jr. created this Life Tributes page to make it easy to share your memories.

Send flowers to the Regis family.