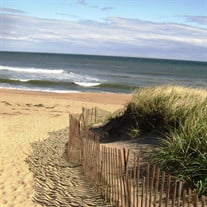 Rye Beach – Josephine F. “Jo” Clifford, age 98, of Rye Beach, passed away Sunday, December 13, 2015, in the presence of her sons and family. Josephine was the second eldest child of nine children born to John Joseph and Margaret (McAloon) Callagy. Born on December 10, 1917, Josephine reached her 98th birthday last Thursday. Josephine attended both St. Augustine’s and St. Mary’s Catholic girls’ schools in Lawrence, MA. She received her teaching certificate in 1939 from Lowell State Teachers College and was an elementary school teacher in Hampton for 25 years. Josephine married James H. Clifford, also of Lawrence, in 1941. Eventually they settled in Rye Beach and raised four sons, James H. Clifford, III, MD; John J. Clifford, DMD; Thomas A. Clifford and William F. Clifford. Both Jim and Jo were members of the Abenaqui Country Club enjoying years of golfing and socializing with friends and family. Upon Josephine’s retirement in 1982 she and Jim traveled to Florida for the winter. Upon Jim’s death, Josephine returned home year round and entertained family and friends at her home. She was a role model to all her grandchildren instilling the value of an education and hard work. Jo was an avid gardener maintaining her extensive yard and gardens throughout her life. Josephine continued to play bridge with a weekly group of friends for years and had played the Monday before she passed away. Surviving family includes sons and spouses, John (Kate), Thomas (Gerry); William (Lee) and daughter-in-law, Gail Clifford. Eight grandchildren, their spouses, and 16 soon to be 17 great-grandchildren will miss her terribly. She is survived by her sister Anna Normandy, of Amherst, NH, several sisters-in-law as well as numerous nieces and nephews. Jo was preceded in death by husband, Jim, in 1995; eldest son, James H. Clifford, III, MD; and grandchildren, Peter and Erin Clifford. Her sister Kate Donovan and brothers John, Thomas, William, Leonard, Eugene and Gerald also predeceased her. Visiting hours will be from 2-4 and 6-8 P.M. Friday, December 18, 2015 at the Remick-Gendron Funeral Home-Crematory, 811 Lafayette Road, Hampton. A Mass of Christian Burial will be celebrated at 10 A.M. Saturday, December 19, 2015 at St. Theresa Church, 820 Central Road, Rye Beach. Burial will follow at the Central Cemetery, Rye. Donations in Josephine’s memory may be made to the Richie McFarland Children’s Center Endowment Fund, 11 Sandy Point Rd., Stratham, NH 03885 or the charity of one’s choice.

The family of Josephine F. Clifford created this Life Tributes page to make it easy to share your memories.