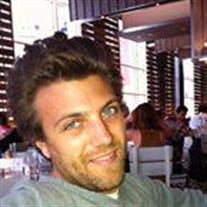 Boston, MA – Joshua D. MacArthur, 34, of Boston, formerly of North Hampton, NH died April 9, 2016. Joshua was born April 13, 1981 in Exeter, NH to David MacArthur of North Hampton and Deborah (Brown) Girouard of Hampton. He attended Sacred Heart Middle School and graduated from Winnacunnet High School with the Class of 1999. Josh was an active athlete, artist and chef. He played hockey for most of his life growing up, as well as soccer and lacrosse. He was also an avid skier and bicyclist. At heart, Josh was an artist; he loved to paint murals, design furniture and especially create pottery. His pottery creations were fondly referred to as “Pots by Josh”. He also thrived in the kitchen. Josh loved to create new recipes and prepare feasts for his friends and family. Dinner parties and family holidays often included one of his special, “fancy” dishes. Josh graduated summa cum laude from Gordon College in Wenham, MA with a bachelor’s degree in Economics. He also completed a minor in Ceramics from the Museum of Fine Arts in Boston, MA. Josh loved living in Boston. He frequented the symphony; he loved to eat out; and he learned to sail in Boston Harbor so he could spend time on the city’s waterfront. For the past nine years, Josh combined his love for design with his business savvy working for Wayfair.com, an online furniture retailer. As an Associate Director he travelled the world, made friends across countries and continents, and helped bring products to market from many different styles and cultures. In addition to his parents, he leaves his stepmother, Amy MacArthur, brother Michael MacArthur, and sister, Christine Loebsack and her husband David of Virginia, as well as many uncles, aunts, cousins and friends. He was predeceased by his stepfather, Isaac Girouard in 2014. A Celebration of Life service will be held at the First Baptist Church of Hampton Falls, 3 Lincoln Ave, Hampton Falls, NH 03844 on Saturday, April 16, 2016 at 2:00pm. A reception will follow. Relatives and friends are respectfully invited. In lieu of flowers, donations may be made to Teen Challenge of New England (http://tcnewengland.org). Assistance with the arrangements was by the Remick & Gendron Funeral Home-Crematory, Hampton.

The family of Joshua D. MacArthur created this Life Tributes page to make it easy to share your memories.