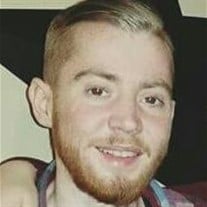 Hampton – Joshua T. Sharpe, 23, of Hampton, passed away peacefully, December 13, 2016, surrounded by his family at Massachusetts General Hospital after a lifelong battle with Cystic Fibrosis. He was born in Lawrence, Mass., February 7, 1993 the son of Charles and Patricia (Delaney) Sharpe of Hampton. Joshua was raised and attended schools in Hampton and graduated from Winnacunnet High School with the Class of 2011. He was employed as a casino dealer at Ocean Gaming at Hampton Beach the past five years and also worked at Scoot-N-Around at Seabrook Beach as the rental manager for the scooters. He was an avid New England sports fan, enjoyed golf and was proud of his hole in one at Breakfast Hill Golf Club in Greenland. Josh enjoyed many good times on the golf course, at concerts or at the beach with his family and close friends. In addition to his parents, he leaves his sister, Callie Sharpe of Hampton, his paternal grandmother, Shirley Sharpe of Seabrook, his paternal great aunts Mary McCarthy, Mona McCarthy and Justine O’Neil, his maternal grandmother, Kathleen Delaney of Lawrence, Mass., two uncles, Michael Delaney and his wife Kathy, Patrick Delaney and his wife Jennifer, and cousins, Michael, Ryan, Tyler and Sophie Delaney, and his god son Braeden Delaney. He was predeceased by his maternal grandfather James Delaney. Visiting hours will be from 2-6 P.M. Sunday, December 18, 2016 at the Remick & Gendron Funeral Home-Crematory, 811 Lafayette Road, Hampton. A mass of Christian burial will be celebrated at 11 A.M. Monday December 19, 2016 at Our Lady of the Miraculous Medal Church, 289 Lafayette Road, Hampton. Relatives and friends are respectfully invited. Interment will be private. In lieu of flowers, donations may be made to Massachusetts General Hospital for Children Child Life Fund, 125 Nashua Street, Suite 540, Boston, MA 02114, http://www.massgeneral.org/children/about/.

Hampton &#8211; Joshua T. Sharpe, 23, of Hampton, passed away peacefully, December 13, 2016, surrounded by his family at Massachusetts General Hospital after a lifelong battle with Cystic Fibrosis. He was born in Lawrence, Mass., February 7,... View Obituary & Service Information

The family of Joshua T. Sharpe created this Life Tributes page to make it easy to share your memories.