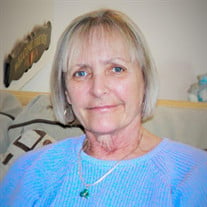 North Hampton – Joyce M. Daly, 64, of North Hampton and Thornton, NH, passed away on Wednesday, February 15, 2017 at the Portsmouth Regional Hospital surrounded by her loving family. She was born on March 25, 1952 in Lawrence, MA, a daughter of Lillian A. (Russell) O’Connor of North Hampton and the late Francis R. O’Connor. Joyce was raised in Lawrence and graduated from Lawrence High School with the Class of 1970. Shortly after graduation, Joyce went to work for the former New England Telephone and retired from Verizon in 1997 after more than 27 years with the company. She was a hard-working woman devoted to caring for her two sons. Joyce volunteered as an EMT with the North Hampton Ambulance Corps during the 1980s. She was generous and would always have a small gift for visiting family members and friends. Joyce loved animals and the mountains and especially enjoyed spending time at her home in Thornton. She also enjoyed music and had stacks of records. Above all else, family was dearest to her heart. She was a fantastic storyteller and times with her grandchildren were some of the happiest times of her life. She is survived by her beloved mother, Lillian A. (Russell) O’Connor; her two sons, Frank Daly and his wife Beth of Manchester and Steve Daly and his wife Meganne of Kingston; her 7 grandchildren, Frankie and his wife Kaitlyn, Sean, Makenzie, Steve, Alex, Michael, and Matthew and her great granddaughter, Juniper. Joyce also leaves her sisters, Carolyn Gravel and her husband Alan and Patricia Fitzgerald as well as her nieces, nephews, cousins and many other dear friends and family. She will be sadly missed by all who knew and loved her. Visiting hours will be from 4 to 6 pm on Monday, February 20, 2017 in the Remick & Gendron Funeral Home – Crematory, 811 Lafayette Rd., Hampton. Services will follow the visitation starting at 6 pm in the funeral home. Family and friends are respectfully invited. Burial will be in the spring in the Pine Grove Cemetery, Thornton. In lieu of flowers, the family suggests donations to the New Hampshire S.P.C.A. P.O. Box 196, Stratham, NH 03885.

North Hampton &#8211; Joyce M. Daly, 64, of North Hampton and Thornton, NH, passed away on Wednesday, February 15, 2017 at the Portsmouth Regional Hospital surrounded by her loving family. She was born on March 25, 1952 in Lawrence, MA, a daughter... View Obituary & Service Information

The family of Joyce M. Daly created this Life Tributes page to make it easy to share your memories.

Send flowers to the Daly family.