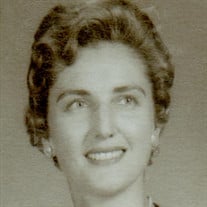 Concord - Joyce Marie (Donigan) King, 90, a longtime resident of Rye, NH, passed away peacefully on March 31, 2022. Joyce, born on December 6, 1931, grew up in Brookline, MA, but called her home the beaches of New Hampshire, where her parents, sister Carole and she would vacation in the summers. In the summer of 1951, when Joyce worked at Harry’s Luncheonette in Hampton Beach, Joyce met Thomas King, who proclaimed to the parents of each woman he wooed that he was studying for the priesthood. Joyce soon learned this wasn’t true, but Tom charmed her. That year—finances dashing Joyce’s dreams of a teaching career—Joyce started work as a secretary for New England Telephone in Boston. Her boss, Mr. Stokes, would often grumble that he wished to give his detractors a “turpentine enema.” Joyce delighted in this phrase and would come to wish the same on anyone who wronged her or her loved ones. Joyce was living with her parents in Brookline in early 1958 when Tom called after two (2) years of military service. “Tommy King?!?” Joyce cried to her mother. “He’s a jerk!” They married that September. The marriage of Joyce and Tom was tumultuous in its early years. “Do you think the marriage will last?” their neighbor grimly—and repeatedly—asked Joyce. It did, for over 60 years. Joyce and Tom yearned for a child, but for many years their prayers went unanswered, until one day in April of 1970 when Joyce saw her doctor to discover the cause of indigestion--who would come to be called Benjamin. Benjamin could not have asked for a more devoted mother than Joyce. When Benjamin took the bar exam in 1997, the bar exam standard of “minimally passing” amused him. “Mom,” Benjamin would say, “you have exceeded a minimally passing grade in motherhood.” How Joyce would laugh, knowing it was true. Joyce stayed at home with Benjamin through his early childhood, but she seized an opportunity to fulfill her dream of working with children when Benjamin reached middle school, becoming a teacher’s aide. Joyce’s knowledge of her son’s music helped her build instant rapport with her students. “I know Van Halen,” Joyce would confide to them, inspiring their awe. Joyce not only knew Van Halen. She liked them! Benjamin discovered this one day when Joyce cackled, “I love the way he says that!” after David Lee Roth cried “Oh my God!” on the millionth play of the "1984" album in the King family room. Joyce advanced with Benjamin through the Chelmsford, MA, public schools, ultimately becoming an administrative assistant to the principal. In those days Joyce and Benjamin would drive to the high school in the morning, then walk the halls to their respective stations before most arrived for the day. “No one can hear you coming!” Benjamin would rib Joyce, as reverberations from the click of her heels boomed through the corridors. Of course, all could hear Joyce coming. The click of those heels proclaimed the arrival of a woman intent on doing work that she loved. Joyce called Benjamin in his college dorm, sobbing, in the spring of 1990. Her rare eye condition, pathological myopia, had forced her to resign her beloved employment with the Chelmsford Public Schools. Her daunting condition notwithstanding, Joyce refused to resign her life. Always a voracious reader, Joyce continued to devour her novels, reading deep into the night in the room of the house dubbed the “JDK room,” every night, developing a part of her macula the doctors thought dead. Thomas and Joyce etched the number “6” into each large print book she read in the Rye Public Library, where the evidence of Joyce’s remarkable reading achievements remains. Joyce cherished the last decades of her life with her husband and son in Rye. There were many walks along Jenness Beach, particularly that September walk when Benjamin and Joyce strode triumphantly hand in hand, after Benjamin passed the bar. Joyce savored hot dogs at the Rye Beach Club, the Sir David’s broiled chicken sandwich at Abercrombie & Finch, lobster rolls at the Olde Ferry Landing, and pastrami & melted Swiss sandwiches at the Rusty Hammer, where the staff threatened to name the sandwich after her. And when Joyce’s eyes grew too tired to read, she enjoyed reclining in her chair in the “JDK room,” listening to Josh Groban—and occasionally other artists as well. Once, Benjamin stopped a CD because dinner was ready. “Why did you shut that off?!?” Joyce exclaimed. “I was enjoying that! Who was that?" Words cannot express the horror on Joyce’s face when she learned she had been enjoying...Motley Crue. Joyce endured terrible suffering in her final years. The caretakers at the Birches of Concord—particularly Laurie—took exceptional care of her. Fortunately, when Joyce passed, she did so serenely, Josh Groban’s voice that she loved so well singing her to sleep. Joyce is survived by her loving son, Benjamin. A graveside service will be held at 10:30 am on Saturday, April 16, 2022 in the Central Cemetery in Rye, NH.

Concord - Joyce Marie (Donigan) King, 90, a longtime resident of Rye, NH, passed away peacefully on March 31, 2022. Joyce, born on December 6, 1931, grew up in Brookline, MA, but called her home the beaches of New Hampshire, where her parents,... View Obituary & Service Information

The family of Joyce King created this Life Tributes page to make it easy to share your memories.