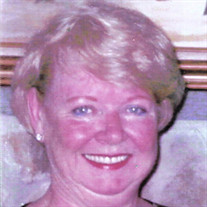 Hampton - Judith “Judie” Anne (Neylon) O’Brien, 76, of Hampton, died peacefully on February 11, 2019 at her home after a courageous seven-year battle with cancer. Judie was surrounded by her devoted husband of 53 years, Bill O’Brien, her children and loving family. Judie was born on October 25, 1942, the daughter of the late William F. Neylon and Lillian (Fleming) Neylon, in Lowell MA. Judie graduated from Saint Michael’s Grammar School in Lowell MA, Academy of Notre Dame in Tyngsboro MA, and Fisher College in Boston MA. Judie and Bill were married in August of 1965 and spent the next 30 years moving as Bill was stationed about the country with the United States Air Force. Judie worked at Quantico in Virginia and for the Norwegian Cruise Lines in Los Angeles while raising their two children. She loved traveling through-out Europe and cruising to the islands of the Caribbean. One constant through-out her lifetime was the New Hampshire coastline. In 1994, after retiring, Judie and Bill set forth making their summer destination a permanent home, where their grandchildren now spend many days on the beach. Over the last 15 years, Judie has annually escaped the New England winters to Naples, FL with dear friends. Most importantly, Judie cherished friendships, family, and her grandchildren. Besides her husband, Judie is survived by her two devoted children, Robin (O’Brien) Reisman and her husband Harold L. Reisman of Milford MA; and William N. O’Brien and his wife Graeme (Campbell) O’Brien of Manhattan, New York. Judie was the proud grandmother “Grammy” to her six grandchildren: Neylon, Paige, Griffin, and Caden Reisman, and Quinn and Gillian O’Brien. She is also survived by her brother, Attorney William P. Neylon and his wife Sally Neylon of Saint Johnsbury VT. A Mass of Christian Burial will be celebrated at 11 am on Friday, February 15, 2019 at St. Theresa Church, 815 Central Road, Rye. In lieu of flowers, gifts may be made to the Leukemia and Lymphoma Society ,70 Walnut St. Ste. 301, Wellesley, MA 02481. The O’Brien family would like to express their sincere thanks and appreciation to the MGH Cancer Center, the staff of Exeter Hospital, and the Rockingham VNA and Hospice who always cared for Judie with kindness and dignity.

The family of Judith A. O'Brien created this Life Tributes page to make it easy to share your memories.

Send flowers to the O'Brien family.