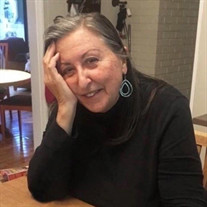 Hampton – Karen K. Avery-Bacigalupo, 77, of Hampton Falls, passed away peacefully at her home on Friday, August 21, 2020. See was born in Union, OH on April 30, 1943 the daughter of the late Harold R. and Glenna (Miller) Avery. Raised in Preble County, Ohio she graduated from Monroe Township High School with the Class of 1961. She moved to the New Hampshire Seacoast with her husband and two children in 1971, where she made her home until her last Days. With her family, she owned an Arabian Horse Farm in Hampton Falls and later she was proud to deliver flowers for her daughter at Drinkwater Flowers in Hampton. She was also involved in charitable work through the Hampton Falls First Baptist Church. Karen was a free-spirt, a brave and adventurous woman with a huge heart who always showed up for people. She was a regular “foodie” at many local restaurants, where you could find her telling one of her great stories. She loved horses, cars, motorcycles, traveling, sailing, gardening and spending time with family and friends. She was an insatiable treasure-seeker, collector-of-things and an occasional “trouble-maker”. Surviving family members include her daughter, Angela K. Bramante and her husband Mick of Hampton Falls; son, John J. Graziano and his wife Kimberly of Port St. Lucie, FL; brothers, Dane Avery and his wife Valerie of Dallas, GA, Steven Avery of Post Falls, ID, Daryl Avery and his wife Carol of Eaton, OH and grandchildren, Maceo and Giana Bramante and Catalina Graziano and many nieces and nephews. In addition to her parents and husband, Peter Bacigalupo, she was predeceased by her brothers, Harold “Sonny” Avery and Ronald Avery. All services will be private

The family of Karen K. Avery-Bacigalupo created this Life Tributes page to make it easy to share your memories.

Send flowers to the Avery-Bacigalupo family.