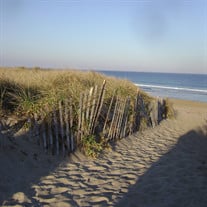 Rye Beach – Katherine Lumaghi Clifford, age 75, passed away peacefully on Monday, November 7, 2016 at Wentworth Douglass Hospital in Dover after a brief illness, in the presence of her daughter and in the hearts of her family. Kate was the third eldest child of six children born to the late Louis F. and Katherine O. (Boyd) Lumaghi. She was born on October 16, 1941 in St. Louis, MO and went on to attended Villa Duchesne School in St. Louis, MO, Newton College of the Sacred Heart in Newton Centre, MA and completed her BA in English at St. Louis University in St. Louis, MO. Kate married John J. Clifford, DMD of Rye Beach in St. Louis, MO in June of 1968. They settled in Rye Beach and raised three children, Katherine (Katie), John, and Elizabeth (Liz). An accomplished artist, Kate studied Art at UNH Graduate School and drew in charcoal and pencil and painted in watercolor, acrylic and oil. She was an avid gardener and shared her talent by volunteering in the gardens of the Moffat Ladd House in Portsmouth, NH and the Little Boar’s Head Garden Club in North Hampton. She gave of her time freely, working for many years as secretary for various clubs and volunteering at the Rye Public Library. Kate made family a priority by caring for her grandchildren and hosting the Clifford family holiday gatherings and the Lumaghi family reunions in the summer. She was also a member of the Rye Beach Club and will be fondly remembered by her family and friends for always getting the best table in the shade. Surviving family includes John, her husband of 48 years, their three children and their spouses, Katie Nadeau (Tom), John Clifford (Nadia), and Liz Clifford (Wayne), and her five grandchildren Henry Nadeau, James Clifford, Thomas Nadeau, Evan Clifford and Alexandra Clifford. Kate is survived by her brothers Louis Lumaghi (Ingrid) of Ormand Beach, FL, Richard Lumaghi (Bonnie) of San Francisco, CA, and Peter Lumaghi (Nancy) of St. Louis, MO and her sister Ann Lumaghi (Rick) of Abiquiu, NM as well as her sisters- and brothers-in-law and her many nieces and nephews. In addition to her parents she was predeceased by her brother Joseph Lumaghi. Kate’s family would like to thank the wonderful doctors, nurses and staff at the Seacoast Cancer Center and at Wentworth Douglass Hospital for their care and support. At Kate’s request all services will be private. Donations in Kate’s memory may be made to the Seacoast Cancer Center by giving to the Wentworth-Douglass Foundation, 789 Central Ave, Dover, NH 03820, https://www.wdhospital.com/wdhf/giving/donate-now.

Rye Beach &#8211; Katherine Lumaghi Clifford, age 75, passed away peacefully on Monday, November 7, 2016 at Wentworth Douglass Hospital in Dover after a brief illness, in the presence of her daughter and in the hearts of her family. Kate was... View Obituary & Service Information

The family of Katherine L. Clifford created this Life Tributes page to make it easy to share your memories.