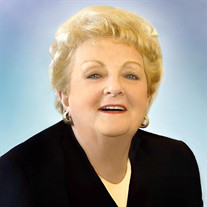 Exeter – Katherine Ann “Kitty” Crotty of Exeter and a former longtime resident of North Hampton, passed away peacefully on October 24, 2019 surrounded by her loving family. Kitty was born in Boston, MA on February 10, 1929, daughter of the late William and Mary (McCarthy) Grimes. Kitty was raised in the Jamaica Plain neighborhood of Boston. She graduated from Regis College with a Bachelor’s Degree in Education and also studied opera at the New England Conservatory of Music. She met her late husband, Leo J. Crotty in 1950 and settled in Boston after they were married on May 3, 1952. Leo was a career Navy man and Sea Captain. They moved frequently, residing in New York, New Jersey and Massachusetts. In 1969, they relocated to North Hampton with their seven children. For many years, Kitty taught music in the Portsmouth School System for kindergarten through grade six and was loved by her students. The Catholic Church played a very important role in her life and she was a faithful communicant of St. Theresa Church in Rye Beach and a longtime choir member at the church. Kitty loved opera and was an accomplished soprano and pianist. She was an avid tennis player, sailor, swimmer, skier, golfer and cook. Always the optimist, she was smart, fearless, had a zest for life and a strong opinion on everything. Family was key to her life and she loved and influenced her children, grandchildren and great grandchildren. Kitty was happiest celebrating life’s events with family and friends and a large Manhattan. With Kitty’s arrival, Heaven just became a little more exciting. Left to cherish her memory are her sons, Mark and his wife Sally, of Kittery Point, ME, Leo J. Jr. of Newcastle and James G. of Hampton, her daughters, Beth Gaffey and her husband Ray, of North Hampton, Kathy McNamara and her husband Kevin, of West Newbury, MA and Anne Crotty and her husband John Zannos, of Newcastle. She also leaves her 14 grandchildren, 6 great grandchildren and many nieces, nephews and dear friends. In addition to her parents and her husband, Kitty was predeceased by her daughter, Carolyn Crotty, her brothers, James, William and John Grimes and her sister, Marie Hegarty. Friends may visit from 2 to 5 PM on Sunday, November 3, 2019 in the Remick & Gendron Funeral Home – Crematory, 811 Lafayette Rd., Hampton, NH. A Mass of Christian Burial will be celebrated at 10 AM on Monday at the St. Theresa Church, 815 Central Rd., Rye Beach, NH. Burial will follow in the Center Cemetery, North Hampton. In lieu of flowers, memorial donations may be made to the Alzheimer's Association P.O. Box 96011, Washington, DC 20090.

The family of Katherine A. Crotty created this Life Tributes page to make it easy to share your memories.

Exeter – Katherine Ann “Kitty” Crotty of Exeter and a former...

Send flowers to the Crotty family.