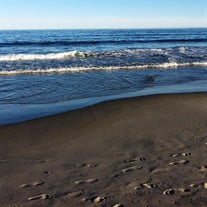 Hampton – Kathleen D. Hart, 90, of Hampton died peacefully on Monday, March 27, 2017 surrounded by her daughters at Exeter Hospital. She was born on November 24, 1926 a daughter of the late Garfield Carruthers and Margaret (Cook) Dumville. Raised in Prince Edward Island Canada she moved to the states in her early 20’s, settling in North Hampton with her former husband the late John Kuntz. She later moved to Hampton Falls for a number of years and eventually Hampton, where she made her home until her passing. Kathleen worked at Sylvania as an inspector, retiring in 1984. Mrs. Hart was a member of the Rebekah’s Lodge of Hampton and the Hampton United Methodist Church. She enjoyed crocheting and knitting and will forever be remembered as a generous and kind hearted person. She shared 11 years of marriage with her late husband Clarence Hart who predeceased her in 1989. Surviving family members include her daughters, Norma D. Rogers of Hampton and Denne Kuntz of San Diego, CA; brother Ray Carruthers and his wife Phyllis of Ontario, Canada; sisters, Fairley Yeo and her husband Alvin and Audrey Thomson and her husband Blair all of Prince Edward Island, Canada; grandchildren, Cassandra Kuntz and Krystle Rogers; great grandchildren, Aaron and Justin Burleigh and numerous nieces and nephews, including Betty Titcomb and Mona Gleason. In addition to her parents and husband, she was predeceased by her brother Alison Carruthers; sisters, Norma Carruthers, Gladys Flanders and grand son-in-law Scott Burleigh. Visitation will be held from 11 AM to 1 PM on Saturday, April 1, 2017 in the Remick & Gendron Funeral Home - Crematory, 811 Lafayette Road, Hampton. A service will immediately follow at 1 PM in the funeral home. Burial will be private. In lieu of flowers, donations may be made to Lupus Foundation of America, Inc., 2121 K Street NW, Suite 200, Washington, DC 20037-1830.

Hampton &#8211; Kathleen D. Hart, 90, of Hampton died peacefully on Monday, March 27, 2017 surrounded by her daughters at Exeter Hospital. She was born on November 24, 1926 a daughter of the late Garfield Carruthers and Margaret (Cook) Dumville. Raised... View Obituary & Service Information

The family of Kathleen D. Hart created this Life Tributes page to make it easy to share your memories.

Send flowers to the Hart family.