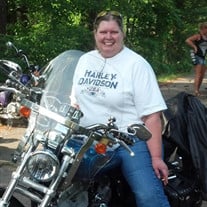 Her family gathered privately on Saturday, April 16, 2016, at the North Hampton Beach to celebrate Kat's life, knowing that Kat would not want this to be sad time, but one to be together as a family and share laughter. Portsmouth, NH – Kathleen L. “Kat” Swan-Smith, 57, of Monico, WI, passed away peacefully on Friday, April 15, 2016 at the Portsmouth Regional Hospital after a brief illness. She was surrounded by her loving family. She was born in Morristown, NJ, a daughter of the late George C. Swain and the late Ruth (Smith) Donais. Kat was in New Hampshire to attend to the affairs of her recently deceased mother when she fell ill. Kat was raised in Lake Bluff, IL. She graduated from Lake Forest High School in Lake Forest, IL and went on to earn her Associates Degree in Electronics from Waukesha County Technical College. She had made her home in Monico for nearly 30 years and had owned and operated the Monico Log Cabin Bar since 2007. While living in Monico, she reconnected with her high school sweetheart, Steve Smith, and they were married in 2011. Steve was truly the love of her life and Kat was the happiest she had ever been. Her beloved Steve passed away in August of 2013. Kat loved owning the tavern and most of her customers became close and dear friends. She was a very special lady and one of a kind. She was kind-hearted, artistic, whimsical and often off-the-cuff. She was honest and caring, told it like it was, and always willing to help anyone in their time of need or despair. Kat was intelligent and imaginative and loved fantasy, from Disney to Lord of the Rings. She was also an avid Harley Davidson rider and enthusiast. Kat will be so sadly missed by her family and her many friends from all over the country. She is survived by her son, Charles T. Freitag and his wife, Beth Ann Barret of Cocoa, FL; her brother, Sydney Swan and his wife Diane of Norfolk, VA and her sisters, Christina Swan of North Hampton, NH and Dianna Klopp and her husband, Steve of Fredonia, WI. She also leaves her grandchildren, Bradley Roberts and Marjorie Freitag and her nieces. A Celebration of Life will be held in the early summer in Monico, WI. Family and friends will be invited so please check back with the funeral home website www.RemickGendron.com for service dates and times. In lieu of flowers, memorial donations in Kat’s name may be mailed to the Make-A-Wish Foundation of New Hampshire, 814 Elm St., Suite 300, Manchester, NH 03101-2230 or online at www.wish.org/Donate.

Her family gathered privately on Saturday, April 16, 2016, at the North Hampton Beach to celebrate Kat's life, knowing that Kat would not want this to be sad time, but one to be together as a family and share laughter. Portsmouth, NH &#8211;... View Obituary & Service Information

The family of Kathleen "Kat" Lynne Swan-Smith created this Life Tributes page to make it easy to share your memories.

Send flowers to the Swan-Smith family.