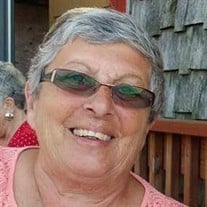 Hampton, NH – Kathy-Ann (Samia) Bateman, 65 of Hampton (better known to all as Sitho), died peacefully on Wednesday, May 11, 2016 after a courageous fight with cancer at Merrimack Valley Hospice House, Haverhill, MA. She was born in Methuen, MA on December 16, 1950, a daughter of Katherine (Bogannom) Samia and the late John Samia. Raised in North Andover she graduated from North Andover High School with the Class of 1968 and went on to attend and graduate from Salem State University with a bachelor’s degree in elementary education. She was a teacher at Seabrook Elementary School for 33 years, retiring in 2008. She also worked a number of years for the New Hampshire Parks and Recreation Department. Sitho enjoyed painting, reading, traveling with her friends, playing cards with her mother, and spending time at Hampton Beach, but her greatest joy was spending time with her grandchildren, Owen and Avah. In addition to her mother, family members include her daughter Kelly-Ann and her boyfriend Jeff Olson; son Shane Bateman, his wife Jessica and her grandchildren Owen and Avah; Brother Gary J. Samia and his wife Linda; nephew Brian Samia and niece Rachael (Samia) Carpenter and their families. She also leaves many wonderful cousins. The family would like to offer a special thank you to all the friends that help Sitho during her battle with cancer and for the support they gave the family during this difficult time. Visitation will be held from 2 – 5 PM on Saturday, May 14, 2016 in the Remick & Gendron Funeral Home- Crematory, 811 Lafayette Road, Hampton. Funeral services will be held at 12 PM on Sunday, May 15, 2016 at the funeral home. Burial will follow at the High Street Cemetery in Hampton. Relatives and friends are respectfully invited. In lieu of flowers, memorial donations may be made to the Mrs. Bateman Memorial Fund, c/o Service Credit Union, 887 Lafayette Road, Hampton, NH 03842.

Hampton, NH &#8211; Kathy-Ann (Samia) Bateman, 65 of Hampton (better known to all as Sitho), died peacefully on Wednesday, May 11, 2016 after a courageous fight with cancer at Merrimack Valley Hospice House, Haverhill, MA. She was born in... View Obituary & Service Information

The family of Kathy-Ann "Sitho" (Samia) Bateman created this Life Tributes page to make it easy to share your memories.

Send flowers to the Bateman family.