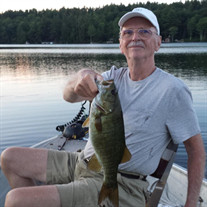 Wells, ME - Ken Higgins, 81, of Wells, Maine, died unexpectedly on October 10, 2020. A former longtime resident of Wakefield, Massachusetts, Ken was the proud father of sons Mark, also of Maine, and Gregg, of Beverly, Massachusetts. In addition to his sons, he leaves behind a loving daughter-in-law, Lisa. He was preceded in death by his wife Janet Higgins, of Wakefield, brother Keith Higgins, of Amesbury, and parents Vivienne (Coste) and Albert Higgins, of Melrose. Ken was a graduate of Melrose High and a U.S. Air Force veteran. He loved the outdoors, especially fishing. No amount of time spent on the water was too great, and no vessel was too small or uncomfortable in which to spend it. Countless hours were spent teaching his sons to fish at Breakheart Reservation in Saugus and, in subsequent years, at Kingswood Lake in New Hampshire and Great Moose Lake in Maine. He eventually stopped baiting hooks, but he never stopped imparting wisdom on when to set the hook. He also enjoyed hunting and bird watching. He was a skilled gardener, handy with tools, enjoyed cars and watching the local teams. Every year each team was destined to go nowhere, especially the Red Sox, and it was always a great and pleasant surprise when one achieved the ultimate success. The accompaniment of family and friends in any of these activities provided him much happiness. The accompaniment of squirrels at his bird feeders, however, was rarely tolerated. For many years he relished the opportunity to host family gatherings on holidays and special occasions. And though he enjoyed them all, he derived special enjoyment from the Fourth of July and the accompanying fireworks displays he helped orchestrate. He wasn’t always verbose, despite a successful career in sales, was often reserved—would not, his brother Keith would say, tell you what was going on with him physically if his hair was on fire—and was both stubborn as a mule and a bull in a china shop, per his late wife. But despite these apparent shortcomings, he was a hard worker, a man of many interests, a finder of bargains, someone who made connections easily and formed lasting friendships, a loving father and above all a good person who tried hard to make the most of his life and provide for his family. He was widely respected and will be missed greatly. A memorial service will be held at a later date, as yet to be determined.

Wells, ME - Ken Higgins, 81, of Wells, Maine, died unexpectedly on October 10, 2020. A former longtime resident of Wakefield, Massachusetts, Ken was the proud father of sons Mark, also of Maine, and Gregg, of Beverly, Massachusetts. In addition... View Obituary & Service Information

The family of Ken Higgins created this Life Tributes page to make it easy to share your memories.

Send flowers to the Higgins family.