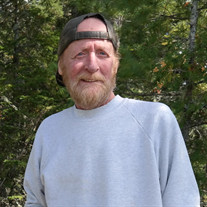 Seabrook - Kevin C. Cole, 54, passed away peacefully on Saturday, May 19, 2018 at Portsmouth Regional Hospital. He was born in Presque Isle, Maine on December 17, 1963, a son of Gerald W. Cole and Violet M. Mclellan, and step son of James A. Mclellan. Kevin later moved to Seabrook New Hampshire where he started a family, built many long-lasting friendships and began working at the Seabrook Nuclear Power Plant. A few years later Kevin got a job working for Dow Seafood where he worked for the remainder of his life. Kevin was a loving father and had three beautiful children with former wife Judith Ranno; Kristina, Joshua and Kaysie Cole. He was one of twelve brothers and sisters including Kimberley Coffin, Shelly Neece, Carla Bechard, Tina Boyles, Dineen DuBose, Dwight Richardson, George, Kent, Michael, James and Robert Mclellan, followed by an abundance of nieces and nephews. A selfless, hard-working man, Kevin endlessly provided for his family and friends alike. He would give the shirt of his back just to see someone smile. His happiest of times were spent up at the camp on Fish River Lake in Maine where he enjoyed relaxing and spending time in the great outdoors. Apart from his love for helping others one of his most memorable qualities was his ability to make everyone laugh through his jokes and antics. And with that he would say: “Arrivederci and keep on keepin’ on.” A celebration of life will be held on Saturday, May 26th at 12 noon at the Raymond Walton American Legion Post 70, 169 Walton Rd.,Seabrook. Don’t forget to wear your flannel. In lieu of flowers, personal donations are appreciated by family members. There will be a separate celebration at a later date in his home town of Presque Isle, ME.

Seabrook - Kevin C. Cole, 54, passed away peacefully on Saturday, May 19, 2018 at Portsmouth Regional Hospital. He was born in Presque Isle, Maine on December 17, 1963, a son of Gerald W. Cole and Violet M. Mclellan, and step son of James A.... View Obituary & Service Information

The family of Kevin C. Cole created this Life Tributes page to make it easy to share your memories.

Send flowers to the Cole family.