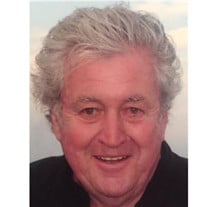 Rye – Kevin Peter Connell, 76, of Rye, passed away on Sunday, February 19, 2017 at the Portsmouth Hospital after a brief illness. Kevin was born February 3, 1941 in Hempstead, NY, a son of the late Lawrence and Miriam (Cunningham) Connell. He grew up in Newton, MA, and began summering in Rye Beach, NH with his family in 1948, and remained a lifelong member of the Rye Beach Club. He graduated from St. Sebastian’s School in Needham, MA, and attended Holy Cross before graduating from Georgetown University with a degree in Economics and History. During college, he managed the famous Georgetown restaurant Clyde’s, which gave him a taste for the restaurant business that would become a lifelong passion and a successful career. While living in Washington DC, Kevin became involved with politics as a key advance man for the 1968 Presidential campaign of Robert F. Kennedy. Following RFK’s assassination, he served as an organizer for Senator George McGovern’s reelection, campaigning in South Dakota by organizing the Sioux tribes of Pine Ridge and Rose Bud, and creating a radio station for them. For McGovern’s 1972 presidential run, Kevin campaigned in Maryland and Alaska. He later joined a political consulting firm called the Washington Forum. In 1972, Kevin met Marianne Pernold and together they moved to Charles Town, WV, to pursue Kevin’s love for the restaurant business. In 1976, Kevin established The Yellow Brick Bank restaurant in Shepherdstown, WV, which he operated successfully for 30 years, contributing to the growth and identity of the town. Renowned for its cuisine and ambiance, The Yellow Brick Bank was patronized by Washington’s elite and press. In 1977, Kevin and Marianne were married and welcomed their son Keper in 1979. In the early ‘80s, the family returned to Rye, NH where Kevin opened several more restaurants while still running The Yellow Brick Bank. In Portsmouth, Kevin developed the The Grill and True Blue Cafe (now Poco’s), and The Marina Cafe (now Latitudes). Kevin maintained his involvement in politics, and Bill Clinton’s first campaign stop was at The Marina Cafe, which ignited Clinton’s primary win in 1992. Kevin was passionate about travel, art, music, and other cultures. In 2000, while visiting his brother and sister-in-law, Lawrence and Linda Connell who were living in Hungary, he became inspired to pursue the import and wholesale of Hungarian antiques. He also enjoyed travels far and wide with his son Keper, including visits to their ancestral home of Ireland, a truffle hunting excursion to Italy, and many scuba diving trips to Honduras. In 2008, Kevin retired from the restaurant business with the sale of The Yellow Brick Bank. In retirement, he spent winters in Buenos Aires, Argentina. At home in Rye, Kevin loved cutting the grass on his vintage Farmall Cub tractor and napping with his tabby cat, Ruben Gonzalez. Every Tuesday night, he met his friends Cesar Chanlatte and Craig Williams to enjoy dinner and conversation. Survivors include his son Keper Connell and daughter-in-law Andree Connell of Rye, his former wife Marianne Pernold of Portsmouth, his brother Lawrence Connell and sister-in-law Linda Connell of Rye Beach, his brother Anthony James Connell of East Kingston, and his nieces Rachel Connell of Portsmouth, and Elizabeth Connell Nielsen of Novato, CA. There will be a celebration of Kevin’s life on Saturday, March 25, 2017 from 1pm-5pm at his home in Rye at 240 Washington Road. Friends and acquaintances are encouraged to attend and speak if they so choose. In lieu of flowers, donations in Kevin’s memory may be made to the Rye Conservation Committee, c/o Rye Town Hall, 10 Central Rd., Rye, NH 03870.

Rye &#8211; Kevin Peter Connell, 76, of Rye, passed away on Sunday, February 19, 2017 at the Portsmouth Hospital after a brief illness. Kevin was born February 3, 1941 in Hempstead, NY, a son of the late Lawrence and Miriam (Cunningham) Connell. He... View Obituary & Service Information

The family of Kevin P. Connell created this Life Tributes page to make it easy to share your memories.

Send flowers to the Connell family.