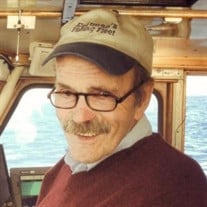 Seabrook Beach – Kevin Driscoll, 72, of Seabrook Beach, passed away peacefully on Thursday, July 25, 2019 at his home. He was born in Lawrence, MA in 1946, a son of the late Michael Leo Driscoll and Veronica (Holland) Driscoll. He was a graduate of Central Catholic High School and Merrimack College, where he earned a Bachelor of Arts degree. Kevin grew up spending summers with his family in Seabrook Beach, where he fell in love with the sea and found his life’s passion for fishing. He started fishing at age 10, and what was a hobby later became his profession. For many years, he was a commercial fisherman, and especially loved the challenge of tuna fishing. This passion also gifted him a beloved second family in the Eastmans, for whom he worked up until the time of his passing. Kevin was an avid reader who consumed books in all genres. He had a serious sweet tooth and would never turn down ice cream or his mother’s chocolate chip cookies. With his booming voice and love of conversation, you could always hear him talking, most often about politics or sports. He enjoyed golf, and was a devoted fan of the Patriots, Celtics, and Red Sox and, in particular, was a lifelong fan of Ted Williams. Surviving family members include his children, Kristine Martel and her husband Scot of North Reading, MA, Daniel Driscoll of Hampton, and Veronica Driscoll of Framingham, MA; sisters, Maureen Savastano of Lawrence, MA, Sheila Grimes and her husband Robert of Windsor, CT, and Kathleen Williams and her husband Thomas of North Andover, MA; grandchildren, Kiley and Samantha Martel, and Amelia Driscoll; and many nieces and nephews. In addition to his parents, he was predeceased by his brother, Michael Driscoll, and brother-in-law, Albert Savastano. According to Kevin’s wishes for a burial at sea, family and friends are invited to gather at 6:30pm on Thursday, August 1st at Eastman’s Docks, 5 River Street, Seabrook Beach, NH 03874 for a service on the boats, with a reception at the restaurant to follow. In lieu of flowers donations may be made to charity of one’s choice.

Seabrook Beach &#8211; Kevin Driscoll, 72, of Seabrook Beach, passed away peacefully on Thursday, July 25, 2019 at his home. He was born in Lawrence, MA in 1946, a son of the late Michael Leo Driscoll and Veronica (Holland) Driscoll. He was... View Obituary & Service Information

The family of Kevin Driscoll created this Life Tributes page to make it easy to share your memories.

Send flowers to the Driscoll family.