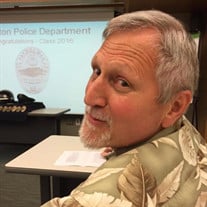 Hampton - Kevin Joseph Whitehead, 62, of Hampton, died peacefully at Brigham and Women’s Hospital in Boston, MA on March 15, 2021, after being stricken ill with the COVID-19 Virus. Kevin’s devoted and loving family surrounded his bedside. Kevin was born on September 18, 1958 in Lawrence, MA, to Joan M. (Deveau) and George E. Whitehead. He was a graduate of North Andover High School where he excelled in athletics. Kevin was a proud Scarlet Knight who made opposing offenses fear running to his side on the gridiron, so much so that an opposing coach gave him a game ball. After high school, he enlisted in the military serving proudly in the United States Marine Corps. During this time, he was stationed between Camp Lejeune and Okinawa, Japan before being honorably discharged with the rank of Corporal. Kevin would later meet Lyn (Lynnley) where they would both tell you they each found the love of their lives and soulmate. They would marry shortly after meeting in 1987 (So short, he proposed after one month). They made their home in Hampton the same year. They loved spending time with each other and were each other’s best friends. Kevin and Lyn had two beautiful children, Brandon Ryan in 1990 and Hannah Leigh in 2000. Kevin took classes at Merrimack College and graduated from UMass Lowell and earned a degree in mechanical engineering. Kevin was a loyal and dedicated employee and coworker at Borden Chemical Plant in North Andover, MA, Hutchinson’s Sealing Systems in Newfields, NH, and for many years at Adhesive Technologies Incorporated in Hampton, NH. If you asked his children or loved ones they would tell you that Kevin could fix or build anything. He was a talented individual with a meticulous eye, who spent countless hours building, remodeling, and crafting toys, birdhouses and furniture. He truly loved his family. He enjoyed coaching sports for his children. He also enjoyed camping, kayaking, reading Stephen King novels, and riding his Harley Davidson with his wife. He was a funny, gentle and laid back man who loved life. Kevin is survived by his loving wife Lyn whom he shared almost 34 years of marriage with and daughter Hannah Whitehead of Hampton, son Brandon and his wife Alexsia Whitehead of Fremont, his mother Joan and father George Whitehead of North Andover, and his siblings, many cousins, nieces, nephews and friends. He is also survived by his beloved dog Rex and cat Pumpkin. The family would like to thank the staff, nurses, and doctors including Arnold Freedman, MD, Caron Jacobson, MD and Paul Richardson, MD at Brigham and Women’s and Dana Farber for the care Kevin received while there. Public visiting hours will be held from 2:00PM to 4:00PM on Sunday, March 21st in the funeral home. Due to COVID distancing requirements, funeral services are private, please contact the family for further information. In lieu of flowers, gifts may be made to Dana-Farber Cancer Institute in memory of Kevin to support cancer research and patient care at: Dana-Farber Cancer Institute P.O. Box 849168, Boston, MA 02284. Burial services with full military honors will take place at 11 am on Saturday, September 18, 2021 in the High Street Cemetery, Hampton. All are invited.

The family of Kevin J. Whitehead created this Life Tributes page to make it easy to share your memories.

Send flowers to the Whitehead family.