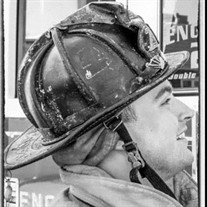 Hampton - Kyle Richard Jameson, 33, of Hampton, passed away on May 15, 2016 at Memorial Sloan Kettering Hospital in New York City, surrounded by loved ones. Kyle was born on July 23, 1982 at Exeter Hospital, the son of Sheila (Wise) Jameson and the late Richard Jameson. He graduated from Winnacunnet High School with the Class of 2000 and while in high school served as an intern at the North Hampton Fire Department, where after graduation he became a call firefighter. Kyle went on to earn an Associate’s Degree in Fire Science at New Hampshire Community Technical College, during which time he was a live-in student at Laconia Fire. After graduation he became a full-time firefighter for the Seabrook Fire Department and earned his paramedic certification from NEEMSI. Kyle’s career then took him to the Derry Fire Department where he began playing the bagpipes with the New Hampshire Pipes and Drums. He later moved to the Seacoast and became a member of Hampton Fire/Rescue, where he will forever be a part of the brother and sister hood. After being diagnosed with cancer, Kyle selflessly committed to sharing his story publicly in order to do something about the extremely high cancer rates that affect firefighters. He was an advocate and role model for his brothers and sisters who have fought, helped others to fight and even those who may have to fight in the future. Kyle had a unique ability to show people that the power of laughter, love and hope will give you the strength to continue the fight. He touched the hearts of countless people who knew him and those who followed his journey online and through the media as he fought so hard for so long. Kyle drew strength during his journey from the support he had from Team Jameson. He was a proud member of the IAFF Local 2664 and a Master Mason with the Saggahew Lodge A.F. & A.M. in Haverhill, MA. Family was his life and Kyle was happiest when spending time with his wife Chris, his son Liam and his Bernese Mountain dogs, Piper and Charlie. Together, they enjoyed time outdoors, boating, fishing and relaxing in their dream house. He also loved hunting, scuba diving and wake boarding. Kyle is survived by his wife and true love, Christine (Harvey) Jameson and their beautiful son, Liam and his beloved mother Sheila, all of whom never left his side throughout this journey. He also leaves his grandfather, Austin “Pepe” Wise and his wife, Pat, his grandmother Nancy Pierce, his cousin, whom he considered his brother, Troy Wise and his fiancée Nicole Bennett, his special uncle and auntie, Glenn and Lauren Wise, along with many other aunts, uncles and cousins. His family, all of his brothers and sisters in fire service and Team Jameson will miss Kyle dearly and he will live in their hearts forever. In addition to his father, Kyle was predeceased by his faithful companion, his dog Piper. Services will be held at 12:00 PM on Saturday, May 21, 2016 in Hope Community Church 11 Hale Street, Newburyport, MA 01950. Relatives and friends are respectfully invited. In lieu of flowers the family suggests donations be mailed to the Hampton Firefighters Charitable Organization c/o Jameson family, 140 Winnacunnet Road, Hampton, NH 03842.

Hampton - Kyle Richard Jameson, 33, of Hampton, passed away on May 15, 2016 at Memorial Sloan Kettering Hospital in New York City, surrounded by loved ones. Kyle was born on July 23, 1982 at Exeter Hospital, the son of Sheila (Wise) Jameson... View Obituary & Service Information

The family of Kyle Richard Jameson created this Life Tributes page to make it easy to share your memories.

Hampton - Kyle Richard Jameson, 33, of Hampton, passed away on...

Send flowers to the Jameson family.