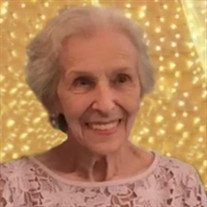 Seabrook – Laura Ellen Turcotte, 89, longtime resident of Seabrook, passed away peacefully on Friday October 22, 2021 at Brookdale Spruce Wood in Durham, where she resided for the past two years due to failing health. Laura was born in Seabrook on June 15, 1932, daughter of the late Gerald J. and Carlene F. (Carter) Perusse. She graduated from Amesbury High School in 1950. In addition to her parents and late husband, Wilfred J. Turcotte, Laura was predeceased by her son, Timothy Turcotte and her sister, Sheila Blanchette. She is survived by her daughter, Karen Bedard of Rochester and two sons Michael Turcotte and his wife, Tara of Wells, Maine, and Gerald "Jay" Turcotte of Seabrook. She also leaves her 6 grandchildren: Travis Janvrin, Tracey Welch and her husband, Lance, Kelly Goodwin, Kira Pilger and Destiny and Ryan Turcotte; her 10 great-grandchildren: Tyler Janvrin; Justin, Noah and Miranda Welch; and Kendall (Doiron), Taylor, Logan, Tucker, Griffin and Sawyer Goodwin; her 3 great-great-grandchildren and several nieces, nephews and cousins. Growing up, Laura worked in her family’s business, Perusse’s Grocery Store, which was a gathering place for locals and a school bus stop for many years. She worked at the former Jerry’s Restaurant in Hampton Falls and at Brown’s Lobster Pound in Seabrook during the summers. She retired from USM Bailey Corporation in Seabrook after 20+ years. Following retirement, she worked part-time at EBPA in Hampton. Laura was a beloved and devoted mother and grandmother who always provided support and love to her family and friends. Laura had many hobbies including reading, puzzle-making and listening to music. She loved to dance and enjoyed line dancing classes with her daughter in later years. Some of Laura’s fondest memories were of large family gatherings and traveling with family and friends -- often recalling her cruise to Bermuda; her trip to Michigan to visit her sister and family, and conquering her fear of driving over the 5-mile-long Mackinac bridge while hauling a camper, and visiting Walt Disney World when it was beautifully decorated for Christmas. She spent much time camping in Ossipee with her parents. Laura attended Four Corners Church and belonged to the Red Hatters and Blue Baggers groups. After retiring, she obtained a certificate in Floral Arrangement from Essex Agricultural & Technical Institute. Over the years, she took great pleasure in collecting beanie babies, tea pots and elephants. Viewing will be from 10 to 11 a.m. with services following on Thursday, October 28, 2021 at the Four Corners Church, 1 Farm Lane. Seabrook. Burial will follow in the Elmwood Cemetery, Seabrook. In lieu of flowers, the family requests that memorial donations be made to Alzheimer’s Association, Massachusetts/New Hampshire Chapter P.O. Box 96011, Washington, DC 200190-6011.

Seabrook &#8211; Laura Ellen Turcotte, 89, longtime resident of Seabrook, passed away peacefully on Friday October 22, 2021 at Brookdale Spruce Wood in Durham, where she resided for the past two years due to failing health. Laura was born... View Obituary & Service Information

The family of Laura E. Turcotte created this Life Tributes page to make it easy to share your memories.

Send flowers to the Turcotte family.