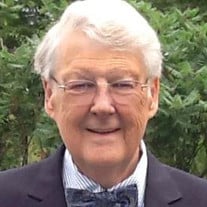 Seabrook— Laurance E. “Andy” Anderson Sr., 79, of Seabrook, died Tuesday, July 3, 2018, at home of natural causes. Andy was born April 11, 1939 in Kensington, NH the youngest child of the late William A. Anderson and the late Mary Ellen (Rose) Anderson. He was the beloved husband of Brenda J. (Colby) Anderson who preceded him in death, after 59-years of marriage in 2017. Andy lived with his wife and raised his family in the communities of Salisbury and South Hampton, before he and his wife moved to Seabrook. He was the founder and a co-owner of A.M. – P.M. Janitorial Sales & Service, a commercial cleaning company he and his wife began in 1970. Prior to that he served the local community as a police officer for the Salisbury Police Department and was employed by Sun Ray Bakery in Methuen, MA as a sales and delivery person. Andy was a devoted and faithful member of the Amesbury Congregation of Jehovah’s Witnesses in Newburyport. His faith was the cornerstone of his life, a result from his decision, as a younger man, to seek the wisdom of Jehovah God through a study of the bible. He spent countless hours sharing the bible’s transformative message with others, and credits the application of scriptural principles the determining factor in his life’s success. Andy was loved deeply, respected widely, and was a reassuring presence during times of struggle. He thrived in hard work, had a generous heart and was resolute in his responsibility toward his wife and family. He loved vintage cars, motorcycles, fishing, camping and a round of golf with his sons. He was joyful when his home overflowed with his children, children’s-children and the little feet of the next generation. He will be sadly missed. . Andy is survived by his six children, Laurance Anderson Jr. and wife Karen of Hampton Falls, Jeffrey Anderson and wife Cheryl of Seabrook, Kimberely DePiero of Amesbury, Mark Anderson and wife Ellen of Wrentham, MA, Douglas Anderson and wife Michelle of Seabrook and William Anderson and wife Donna of Hampton; his 12-grandchildren, Kristie (Anderson) Carrigan, Heidi (Anderson) Trafton, Mallory (Anderson) Tonner, Heather Anderson, Maggie (DePiero) McGrady, Colby Anderson, Shelby Anderson, Jack Anderson, Benjamin Anderson, Bryan Anderson, Ashley (Anderson) Cunningham, Shane Anderson; his great-grandchildren, Alexander Carrigan, Avery Carrigan, Liam Trafton, Grace Trafton, Leah Tonner, Foster Anderson, Hudson Anderson Cunningham and Arlo Cunningham; his brothers-in-law and sisters-in-law, Donna Maestas and husband Paul, William Colby, Sr. and wife, Joyce, Marjorie Anderson and many nieces, nephews and dear friends. He was predeceased by his 3-siblings, William Anderson Jr., Leonard Anderson, and his sister, Carolyn Sargent. Visiting hours will be held Saturday, July 28, 1:00-3:00 P.M. at the Amesbury Congregation of Jehovah’s Witnesses, 179 Storey Ave., Newburyport, MA 01950 A memorial service will immediately follow at 3:00 P.M. at the same location. Memorial donations may be made to the Amesbury Congregation of Jehovah’s Witnesses 179 Storey Avenue, Newburyport, MA 01950.

The family of Laurance E. Anderson Sr. created this Life Tributes page to make it easy to share your memories.

Send flowers to the Anderson family.