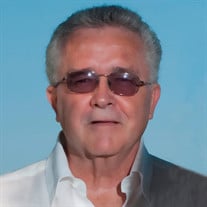 Portsmouth – Lawrence P. “Larry” McManus, Jr., of Portsmouth, passed away early in the morning on Wednesday, January 17, 2018, from the decline brought on by stroke and dementia. Born in Chelsea, Massachusetts in March of 1949, he was the eldest son of the late Lawrence "Mac" and Dorothy McManus. As part of a military family, Larry lived many places in the United States, as well as overseas in Okinawa, Japan. As a boy Larry found Okinawa fascinating and full of adventures. His family settled in Nashua during Larry's high school years. After graduating from Bryant College, Larry was recruited by the Drug Enforcement Agency, where his work as an undercover agent provided fodder for some amazing stories. After leaving the DEA, Larry settled in Portsmouth, New Hampshire and started L.P. McManus Auctions. He expanded into real estate, painting restoration, and bail bond businesses. Larry had a passionate interest in and extensive knowledge of early American history. He enjoyed surrounding himself with history, collecting antiques, and living in an 18th century house that he spent many years restoring. Larry is survived by his wife, Mary Beth and their daughter Rachael; as well as by his son, Phillip and his wife Megan and their two children; brothers, John, Tom, and Robert and their wives and children. Larry will be remembered as the man he was before the stroke - a strong-willed, accomplished, interesting man, who lived life his way. He had a good heart. He will be remembered by many, and greatly missed by family and friends. A memorial service will be held at a later date. In recognition of the amazing care, affection, and comfort Larry received while residing at The Inn of Deerfield, please make any Memorial donation in lieu of flowers to the Inn of Deerfield, 34 Ridge Road, PO Box 87, Deerfield N.H. 03037.

Portsmouth &#8211; Lawrence P. &#8220;Larry&#8221; McManus, Jr., of Portsmouth, passed away early in the morning on Wednesday, January 17, 2018, from the decline brought on by stroke and dementia. Born in Chelsea, Massachusetts in March of... View Obituary & Service Information

The family of Lawrence "Larry" McManus Jr. created this Life Tributes page to make it easy to share your memories.

Send flowers to the McManus family.