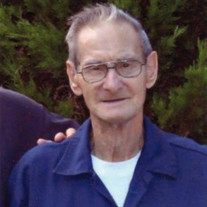 Seabrook- Leon P. “Binga” Bagley, Sr., 85, of Seabrook, died Friday, February 26, 2016 at Merrimack Valley Hospice House in Haverhill, Mass. He was born in Seabrook, January 2, 1931 a son of the late Merle and Aimee (Hall) Bagley. He was a veteran of the Korean War serving with the US Army 424th Field Artillery Battalion from 1950-1953, and was decorated with many medals including his 3 Bronze Star medal which he was awarded for his heroic service in a combat zone, and sharpshooters medal. He was wounded in friendly fire before his discharge in 1953. Mr. Bagley served the town of Seabrook as a police officer many years ago. In addition, he also worked several other jobs throughout his life, as a security guard at Yankee Greyhound, a cook with the Portsmouth Naval Shipyard, a greeter and checker at Sam’s Club and most recently, shucking clams at the local clam shack. He was a member of the Seabrook Fireman’s Association for greater than 50 years, and was an avid lobsterman, fisherman and hunter, which he enjoyed immensely. He was also a member and past Commander of the Raymond E. Walton American Legion Post 70. He leaves behind his longtime companion, Ina Dow of Seabrook, and his children, Leon Bagley Jr. and his wife Kathy of Silvers Springs, FL, David and Jeffrey Bagley both of Seabrook, Sharyn Tomkiewicz and her husband Tony of Amesbury, Mass., and the children he raised and considered his very own, Robert Mortela and his wife Joan, Sheri and Keziah Dow all of Seabrook, and Ina A. Peek and her husband Gordon of Exeter, his sister, Merlene Tirone and her husband Joe of Seabrook, several grandchildren, great grandchildren and great great grandchildren whom he enjoyed spending time with, as well as many nieces and nephews. He was predeceased by his daughter, Lisa Mortela, his brother, Henry Bagley and infant sister, Ellen Bagley. Visiting hours will be from 6-8 PM Friday, March 4, 2016 at the Remick & Gendron Funeral Home-Crematory, 811 Lafayette Road, Hampton. Services will be held at 10 AM Saturday, March 5, 2016 in the funeral home. Burial will follow with military honors in the Wildwood Cemetery Seabrook. Relatives and friends are respectfully invited. If desired, donations may be made to Home Health Foundation, Attn: External Relations, 360 Merrimack Street, Building 9, Lawrence, MA 01843.

The family of Leon P. "Binga" Bagley, Sr. created this Life Tributes page to make it easy to share your memories.

Send flowers to the Bagley family.