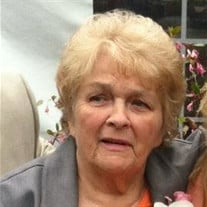 Stratham - Lily Myrna (Eastman) Marston, of Stratham died early morning July 28, 2018 surrounded by family members. She was suffering from diabetic complications and being treated at Portsmouth Regional Hospital. Lily was born December 7, 1940 in Exeter and was raised in Hampton. She was predeceased by her parents, Clifford H. and Lily Jane (Porter) Eastman, sisters Beverly, Shirley Davenport and Arley May; brothers John and Glyn. Lily married RW Marston with whom she recently celebrated 62 years of marriage. Lily is the mother of Donna Thomas and her husband Tom of Scottville MI, Pamela Kolodziej and her husband Michael of Keene, Daniel Marston and his wife Paula of Epping, Joyce Peterson and Gregory Marston and his wife Debra of Stratham, her brother Clifford Eastman of Campton is her only surviving sibling. “She has 13 grandchildren, 16 great grandchildren and numerous other relatives in the Hampton/Exeter area. Lily operated Exeter Septic Tank Services and RW Marston Construction from 1969 until recently retiring. She was a member of Winnicummet Rebekah Lodge of the Independent Order of Odd Fellows in Hampton. She is a Past President of the New Hampshire Rebekah Assembly and a recipient of the Meritorious Service Medal for her dedicated service to assisting those in need. She is a past PTA President of Kensington Elementary School and was also a den mother for the Boy Scouts and a 4-H Leader. Her devotion to her children and grandchildren enabled her to be nominated and become a finalist for “Mother of the Year” for Chanel 25’s morning show. Lily was committed to family, friends, her community and the world, devoting substantial hours to make the world a better place for all. A celebration of life will be held at 4 P.M. Tuesday, July 31, 2018 at St. James Masonic Lodge, 77 Tide Mill Road, Hampton. In honor of her commitment, in lieu of flowers, donations may be made to in her name to the Winnicummet Rebekah Lodge, Eastman Scholarship, c/o Kathy Montgomery, Secretary, 35 Hickory Ave., North Hampton, NH 03862. Scholarships are given to students from Exeter and Hampton area schools. The scholarship was named for her father, Clifford and sister Beverly who combined over 70 years of teaching and coaching in Hampton and Hinsdale. Assistance with the arrangements was by the Remick & Gendron Funeral Home-Crematory, Hampton.

The family of Lily Marston created this Life Tributes page to make it easy to share your memories.