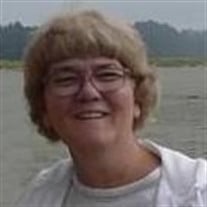 Kingston – Linda S. “Lin” Mealey, 66, of Kingston, passed away peacefully on Monday, November 5, 2018 at Clipper Harbor in Portsmouth after a lengthy battle with dementia and mental illness. She was born in Troy, NY on April 3, 1952, a daughter of the late Thomas Mealey and Elizabeth “Betty” Copeland. Lin and her brothers, Tom and David, had a difficult childhood, but her favorite memories were of summers spent on her Uncle Bill’s farm; traveling in the family’s converted green school bus; and gathering clams for dinner along the seashore. She had a life-long love for the ocean and lighthouses. At a rather young age, Lin left her family and traveled north, one of many “flower children” of the 1960’s, meeting Dennis Mascio in Boston. Lin and Dennis married in 1971 and they settled in New Hampshire, where they raised their 3 children, Bryan, Lissa and Corey Mascio. Lin struggled with bi-polar in the early 1980’s, sometimes in a public way. She could have been silenced by the stigma of mental illness, and the alcoholism that ran in her family, but she wasn’t. Lin was a champion for the underdog – frequently attending AlAnon meetings for Adult Children, sponsoring an Alateen group and actively participating in D.A.D. (Drugs are Dangerous) and their annual Father’s Day festivities at Camp Lincoln. She could also be found at PTA meetings, riding on floats down Main Street Kingston in parades, and cheering loudly on the sidelines of her children’s various activities. Lin was passionate about gardening, camping, canoeing, motorcycling with her husband and friends, bowling, volunteering, butterflies, and she cared deeply for all of peoplekind. She was kind, social and outgoing, singing and dancing until the end, even as dementia crowded out much of her “self” at much too young an age. Attending college after her divorce in 1994, Lin earned her Associates degree in human services and embarked on a career in caregiving - a career that came full circle in the grace of her caregivers at Krempels Center, Wellstone and Clipper Harbor. Surviving family includes her children, Bryan Mascio and wife Carmela, Lissa Mascio and daughter Lea all of Kingston, and Corey Mascio and wife Amber, and their sons, Cove and Jasper who reside in traditional Wiyot territory, what is now known as North Humboldt Bay, CA; brother Tom Mealey of Phoenix, AZ and nieces, Beth, Alyson, Leigh and Laura, as well as a loving extended family, including many members of the Mascio clan. In addition to her parents, she was predeceased by her brother David Mealey. A celebration of Lin’s life will be held from 4:00 to 7:00 PM on Saturday, November 17, 2018 at her son Bryan and Carmela’s home. Relatives and friends are respectfully invited. Please email Bryan at [email protected] for further information. In lieu of flowers, donations may be made to Krempels Center , 100 Campus Drive, Portsmouth, NH 03801.

Kingston &#8211; Linda S. &#8220;Lin&#8221; Mealey, 66, of Kingston, passed away peacefully on Monday, November 5, 2018 at Clipper Harbor in Portsmouth after a lengthy battle with dementia and mental illness. She was born in Troy, NY on April... View Obituary & Service Information

The family of Linda S. "Lin" Mealey created this Life Tributes page to make it easy to share your memories.

Send flowers to the Mealey family.