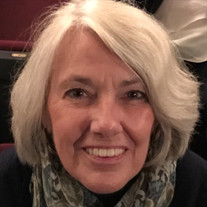 Rye - Lindsay Josephs, 70, of Rye, born Linda Jean Stoecker on April 5, 1947, died too soon of cancer on June 13, 2017, surrounded by her family. Lindsay grew up in Basking Ridge, New Jersey; received her R.N. degree from Westbrook College in Portland, Maine; and practiced nursing in Boston and San Francisco before moving to Rye, New Hampshire where she and her family lived for more than 35 years next to Parson’s Field. Throughout those years, Lindsay made a tremendous difference in the lives of her family, her many friends, her colleagues, and her community. Lindsay focused much of her energy and extraordinary skills on the vulnerable and underserved. She helped start the Portsmouth Prenatal Clinic for pregnant teenagers and indigent women and served for five years as its Executive Director. Lindsay's passion and vision transformed this small clinic with three part-time staff members, volunteer physicians, and hand-me-down equipment into the now comprehensive community health center, Families First, where she remained on the Advisory Board until her death. She also worked as Executive Director of the Bi-State Primary Care Association and as a consultant to various non-profits, before spending the last decade of her career as Program Director at the Endowment for Health in Concord. During her tenure at the Endowment, Lindsay's thoughtful leadership and careful grant funding decisions laid the groundwork for changes in oral health policy—not only in New Hampshire, but nationally. In addition, she volunteered her time, expertise and compassion as an active board member of the Seacoast Mental Health Center, the Seacoast Consumer Alliance, New Heights, and Webster at Rye. Lindsay was also active in town politics and a passionate proponent of preserving the historic nature of Rye Center and expanding the Rye town forest, including donating several acres of her own property. Even more central to Lindsay than her many professional accomplishments, though, were her personal connections and her unconditional love for her family and friends. To her husband, Mark, she was a true partner, providing love and laughter, wise counsel, and the glue that kept their lives together. Lindsay was an exceptional mother- she gave her daughters a strong moral compass, unwavering emotional support, and an appreciation for whimsy and joy. She often said the highlight of her life was being a grandmother and she was the best “Mimi” imaginable. She endured months of chemotherapy so she could live to see the birth of Lucas, named in her honor, and to squeeze in a few more popsicles in bed with Benjamin and cuddles with Caroline. She would do anything for her family and loved her sisters fiercely. She was also the kind of friend and neighbor everyone wanted: warm, thoughtful, fun, and dependable. She was an avid reader and book club participant, loved rock and roll, and made a mean roast chicken. She believed in the magic of Santa Claus and the Tooth Fairy, always remembered to stop and admire the changing moon, and had an eye for finding just the right purse at Marshalls. She was breathtakingly levelheaded, nurtured friendships for decades, and managed to get more done in a day than most accomplished in a month. She knew what mattered in life. She was never afraid to stand up for what was right. She was simply the best. Lindsay is survived by her husband of 40 years, Mark Josephs; her daughters, Abigail Law and Rachel Josephs; their husbands, Jason Law and Gaston Romero Guevara; and their children, Benjamin (5) and Caroline (1) Law, and Lucas Romero Josephs (3 weeks). Lindsay also leaves her sisters, Laurie Spigener and Leigh Stoecker; their husbands, John Victor Spigener and Douglas Sector; and her nieces and nephew, Kelly Lowe, and Daniel and Emma Sector. She was also cherished by the extended Josephs, Blum, and Burris families. She was preceded in death by her beloved parents, Allen and Helen Stoecker. A memorial service for Lindsay will be held in Rye Center, at the Rye Congregational Church, on Saturday, August 12 at 2pm, with a reception to follow in her backyard. In lieu of flowers, donations may be made to Families First Health & Support Center, at 100 Campus Drive, Portsmouth, NH 03801 or www.FamiliesFirstSeacoast.org.

The family of Lindsay J. Josephs created this Life Tributes page to make it easy to share your memories.

Send flowers to the Josephs family.