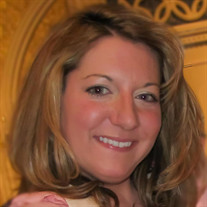 San Antonio, TX - Lindsay E. Marquis, 38, passed away on November 20, 2020 in San Antonio, after a lengthy illness. Lindsay was born April 27, 1982 in Lawrence, MA. Lindsay attended school in Andover, MA before moving to Hampton, NH in 1992. Lindsay continued her education at Hampton Academy and Winnacunnet High School where she graduated in 2000. She enjoyed playing tennis, field hockey, softball, swimming and skiing while in school. After graduation Lindsay continued her education at The University of Rhode Island before transferring to Florida Atlantic University in Boca Raton, FL where she received her Bachelor of Health Services with a Major in Health Administration. She graduated in 2004. Lindsay returned to Hampton, after graduation and continued working in the service industry in many establishments in Hampton. Lindsay enjoyed traveling, cooking, entertaining and spending long sunny days at the beach with her friends and family. Lindsay’s infectious smile would light up a room. She was funny, charismatic, and loved to have a good time. Lindsay moved to San Antonio, TX in 2016 to be with her aunt. Her family would like to give special thanks to Auntie Fran for all her love and compassion. Lindsay is survived by her parents George Marquis and Nancy (Healey) Marquis, her sister Kristen (Marquis) Merrill and her husband Jeffrey Merrill, her brother Eric Marquis and his wife Lynn (Guarente) Marquis of Seabrook, NH, her nieces and nephews, Isabella Marquis, Jack Marquis, Kaitlin Merrill and Theodore Merrill, her Aunt Frances (Marquis) Watkins of San Antonio, TX and her Aunt Jacquelyn Healey and her Uncle Michael McMillan of Hampton, NH. Lindsay will always be loved and remembered. At the request of the family there will be no calling hours.

The family of Lindsay E. Marquis created this Life Tributes page to make it easy to share your memories.