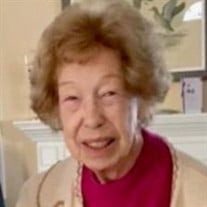 Seabrook – Lois A. Page, 90, of Seabrook, died unexpectedly, Wednesday, April 15, 2020 at her home after a period of failing health. She was born in Hampton, July 27, 1929 a daughter of the late Carl E. and Evelyn G. (Davis) Allen. Lois was raised in Hampton and graduated from Hampton Academy with the Class of 1947. She was the wife of the late Howard C. Page, Jr. who predeceased her in 2003. With her husband, she owned and operated Page Aluminum Company for over 50 years beginning at Hampton Beach and later on Drakeside Road in Hampton. Prior to this she worked at the former Perry’s Nut House in Seabrook and the former Pages Restaurant which was famous for their Shore Dinners at Hampton Beach. In her earlier years she was active as a den mother with the local Cub Scout pack, was a long time member of the former Tide Mill Chapter O.E.S. #67 and served as a deaconess at the Hampton Baptist Church. She leaves four sons, Howard C. Page, III and wife Jo-Anne of Seabrook, Carl A. Page and Frances J. Neville of Newburyport, MA, Jason C. Page of Seabrook, Nathan G. Page and his wife Alicen, her sister Marion Scaggs of Ashburn, VA, five grandchildren, five great grandchildren, nieces and nephews. In addition to her husband and parents she was predeceased by her sister, E. Carolyn Bates who died March 29, 2020 and her daughter-in-law Noreen J. Page in 2011. A celebration of her life will be held and announced at a later date. Private graveside services were held for Lois and her sister Carolyn in the High Street Cemetery, Hampton. In lieu of traditional remembrances, donations may be made to the Seabrook Happy Senior Citizens, c/o Seabrook Recreation Department, 311 Lafayette Road, Seabrook, NH 03874.

The family of Lois A. Page created this Life Tributes page to make it easy to share your memories.