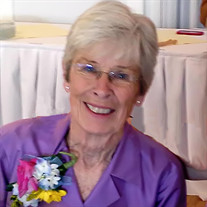 Hampton – Lois Elaine (Warren) Schmelzer, 83, of Hampton, formerly of Sandwich, MA and Bow, NH passed away peacefully at her home, surrounded by her loving family, on Thursday, October 11, 2018. Lois was born on May 18, 1935 in Medford, MA, a daughter of the late Heber S. and Edith G. (Burton) Warren. She was raised in Medford and Billerica, MA and graduated from Howe High in Billerica with the Class of 1953. Shortly after graduation, Lois met and married the love of her life, the late Carl H. Schmelzer, while Carl was in the United States Air Force. After several moves following her husband’s career, she and Carl settled in Sandwich, MA. Lois was always active with her church, wherever she lived, including St. John’s Episcopal Church in Sandwich, MA, St. Paul’s Episcopal Church in Concord, NH and Trinity Episcopal in Hampton. Together, Lois and Carl owned and operated several businesses on the Cape including the Daniel Webster Inn, Mill Creek Realty and Sandwich Construction before Carl became an estate tax attorney for the US Treasury Department. They also bred Morgan horses and enjoyed attending horse shows all over the country. The couple relocated to New Hampshire in 1973 and enjoyed spending their summers on Prince Edward Island. After raising her children, Lois went to work at the NH State House beginning as a committee assistant, then running for and winning election as the Assistant Senate Clerk for the State of NH and finally working as an assistant to both Governors Shaheen and Lynch before retirement. In her retirement years, Lois enjoyed her quilting group, attending Morgan horse shows and traveling with her family. Surviving family members include four children, Laurie A. Zielinski of Hampton, Carla J. Meyers and her husband, Daniel, of Dover, Warren C. Schmelzer of Westminster, CO and Raymond A. Schmelzer and his wife, Barbara, of Concord. She also leaves her ten grandchildren, Jared, Lauren and Kurt Zielinski, Daniel and Matthew Meyers, Camryn and Sydney Schmelzer and Raymond, Kathryn and Krysten Schmelzer, her sisters, Joyce McLaughlin of Hampton and Marjorie Johnston and her husband, Doug, of Exeter, NH, son-in-law Robert Zielinski, daughter-in-law Susan Schmelzer and many nieces and nephews. She was predeceased by her daughter, Kathryn D. Schmelzer and her sisters, Betty Robinson and Norma Carline. Family and friends may visit from 5 to 7 PM on Friday, October 26, 2018 in the Remick & Gendron Funeral Home – Crematory, 811 Lafayette Road, Hampton. Services will be held at 11 AM on Saturday, October 27 at the Trinity Episcopal Church, 200 High Street, Hampton, NH 03842. Burial will be private beside her husband in the Fox Hill Cemetery in Billerica. In lieu of flowers, please consider a donation in Lois’ memory to the Trinity Church (at the address above) or to Rockingham VNA & Hospice, 137 Epping Rd., Exeter, NH 03833. A reception will be held immediately following the church service.

Hampton &#8211; Lois Elaine (Warren) Schmelzer, 83, of Hampton, formerly of Sandwich, MA and Bow, NH passed away peacefully at her home, surrounded by her loving family, on Thursday, October 11, 2018. Lois was born on May 18, 1935 in Medford,... View Obituary & Service Information

The family of Lois E. Schmelzer created this Life Tributes page to make it easy to share your memories.