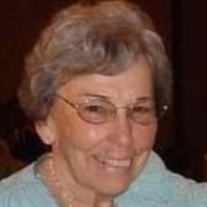 Hampton - Loretta M. Bussiere, 90, of Hampton, beloved wife of the late Richard R. Bussiere, passed away peacefully on Tuesday, May 26, 2020 at Evolve of Rye where she had been living due to failing health. Loretta’s loving family was at her bedside. She was born in Jaffrey on August 16, 1929, a daughter of the late Adolphus Joseph and Mary Louise (Robidoux) Taylor. A graduate of Conant High School with the Class of 1948, Loretta was always proud that she played center and forward on the Conant girls’ basketball team. The last class reunion she attended was September 2013, three years into her dementia, and was still able to reminisce with her classmates. Loretta and Richard were married on September 23, 1950 and enjoyed 62 beautiful years together. She worked for D.D. Bean Match Factory in Jaffrey until 1960 and then became the bookkeeper of Elite Laundry when Richard and his brother Robert purchased it from their father, Andrew. In 1967 Loretta and Richard moved their family to North Hampton to become the owners of Hampton Cleaners. Loretta was the first face customers saw when they entered the business. A 40 year member of Abenaqui Country Club, Loretta never considered herself a good golfer. On 6/13/1992 she hit a hole in one on the 12th hole. She also won the George Bottomley Champion tournament in 1992 and Fuller Cup Champion tournament in 1993. (Not bad for being a bad golfer, huh?) In 1984, she and Richard became "snow-birds," and spent the winters in Winter Haven, FL. While in Florida, she was a member of Lakes Region Country Club and also belonged to a bowling league. An avid reader, she and her friends would swap books allowing her to read many different authors. In 2010 when the first signs of dementia appeared, the decision was made to sell their home in Florida and return to NH to be closer to family. Loretta was a faithful parishioner of Our Lady of the Miraculous Medal Parish of Hampton for many years. Sadly, Richard was diagnosed with aggressive lung cancer in 2012. After Richard passed Loretta's dementia progressed quickly. She moved in with Debbie and Stacy until 2014 when she became a resident of Evolve at Rye. Left to cherish her memory are two daughters, Gail Albro and her husband Henry of West Townsend, MA and Debra Noyes and her husband Stacy of Hampton. She also leaves her four grandchildren, Lisa Hardenbrook and husband Adam of Exeter, Kelly Eads and husband Joshua of Castleton, NY, Samuel Albro of West Townsend, MA and Amy Strickland and husband Kyle of Pelham, AL and her five great grandchildren, Lucy and Molly Hardenbrook and Blake, Luke and Kane Eads. Additionally, she is survived by her in-laws, Robert & Stella Bussiere of Jaffrey and Janet & Robert Mason of Clyde, NC and many cousins, nieces, nephews, grandnieces and grandnephews. She was predeceased by her brother Melvin Taylor. A heart-felt, special thanks to the caregivers at Evolve of Rye. Knowing how much they loved and cared for Loretta and keeping her safe was a comfort to the entire Bussiere family during this most difficult time. Visiting hours will be from 11 to 1 on Saturday, May 30, 2020 in the Remick & Gendron Funeral Home – Crematory, 811 Lafayette Rd., Hampton. Visitors should be aware that a limited number of people will be allowed in the funeral home at any one time, social distancing must be practiced and masks will be mandatory. Burial will be private. Family flowers only please. In lieu of flowers the family suggests donations to The Alzheimer's Association or The American Cancer Society.

Hampton - Loretta M. Bussiere, 90, of Hampton, beloved wife of the late Richard R. Bussiere, passed away peacefully on Tuesday, May 26, 2020 at Evolve of Rye where she had been living due to failing health. Loretta&#8217;s loving family was... View Obituary & Service Information

The family of Loretta M. Bussiere created this Life Tributes page to make it easy to share your memories.