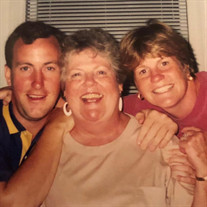 Portsmouth – Loretta Ann Beach, 84, of Portsmouth, died peacefully on Friday, June 19, 2020. Born in Rochester, NY on July 20, 1935, Loretta was a daughter of the late Joseph and Lucille (Parmalee) Gleason. She was raised in Atlanta, GA a graduate of Henry Brady High School. She raised her family in Charleston, SC, Birmingham, MI and Newbury, MA. Loretta met David Henry Beach while performing with the former New Essex Players of Newburyport and they were married in 1980. They settled in Newburyport, MA and continued to act together in 11 musical shows. While living in Newburyport, Loretta owned and operated Loretta Beach Associates, a highly successful secretarial and shared office company she managed for over 10 years. Upon retirement, David and Loretta purchased an RV and toured the United States for the next 3 years, making 4 loops around the country. They relocated to Portsmouth in 2012 after 14 years in Newmarket and finally to Langdon Place of Dover, NH. In addition to David, her beloved husband for almost 40 years, Loretta is survived by her daughter, Nancy Vawter and her husband, Brian of Dover, NH; her son, James Doyle and his wife, Stacie of Denver, CO; her stepdaughter, Lauren Nauman and her husband, Paul of Hopkinton, MA; her stepsons, James Beach of Salisbury, MA and Jeffrey Beach and his wife, Jane of Deerfield, NH; 8 grandchildren; and many nieces and nephews. She was predeceased by her brothers, Joseph, Bobby and Earl Gleason and her sisters, Gloria Margeson and Mary Johnson. Services will be private. If desired, memorial donations may be made to Friends in Action , PO Box 866, Durham, NH 03824.

Portsmouth &#8211; Loretta Ann Beach, 84, of Portsmouth, died peacefully on Friday, June 19, 2020. Born in Rochester, NY on July 20, 1935, Loretta was a daughter of the late Joseph and Lucille (Parmalee) Gleason. She was raised in Atlanta,... View Obituary & Service Information

The family of Loretta A. Beach created this Life Tributes page to make it easy to share your memories.

Send flowers to the Beach family.